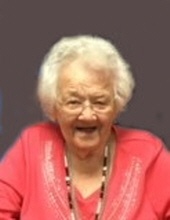 Arrangements are under the care of the
Vander Ploeg Funeral Home; Boyden, Iowa.
Laura Katherine Mary Kruse Krueger was born on May 10, 1923, on the family farm in Sioux County Iowa. She was the oldest of five children born to Richard and Viola (Schmidt) Kruse. She attended St. John’s Lutheran School through 8th grade and was confirmed at St. John’s Lutheran Church. Laura graduated from Boyden High School in 1941 and obtained her teaching degree at Augustana College in Sioux Falls, SD. Her first teaching position was second grade in George, Iowa. (Nine miles from the family farm.) Laura was very active in her congregation’s Luther League during her youth. She would often write to the organization’s headquarters and ask for tips and ideas on programs and projects. Laura’s letters challenged the Executive Director, Dorothy Lange, to provide suggestions. Through this correspondence with Dorothy, the thought of Christian Day Schools was born. Ready for an adventure, Laura accepted a call from Rev. Edmund Krueger, to teach at the Chapel of Peace Christian Day School in Inglewood, CA in September 1945. This was the first Christian Day School west of the Rockies. Several years later, while visiting with Dorothy Lange, in Vancouver, British Columbia, Laura saw an opportunity to open a new school. With many young children and no Kindergarten in the region, Laura helped open a Christian Day School in Burnaby (a Vancouver suburb) in 1953. This was a blessing to the congregation as well as the community. During her time there, the school offered classes up to third grade. From Canada, she went to St. Paul’s Lutheran Church in Waverly, IA, for a few years, before moving back to California, where she taught in several schools, including San Clemente, Anaheim and Norwalk. She also served as Principal at Chapel of Peace in Inglewood. During her teaching career, Laura completed her BA degree and earned her MA at Concordia Teacher’s College in River Forest, IL. Then while again teaching in California, she became reacquainted with the widowed pastor, Rev. Edmund Krueger. Their friendship deepened, and they were married on August 2, 1969. Ed was serving a church in Phoenix, AZ at that time, and Laura taught at the church’s day school and enjoyed her role as Pastor’s wife. They were only married for nine years, before Ed died in 1978. Following his death, Laura returned to serve as Principal at St. Paul’s Lutheran School in Waverly, IA. But always open to the Spirit’s call and challenge, she returned to California, and taught in several of the aforementioned schools once again. In addition to teaching, Laura taught piano lessons to several students and played the organ for various churches. She sang with a professional Bach Choir in Vancouver and later in the Crystal Cathedral Choir in southern California. She also spent many hours serving as a Counselor-on-Call at the Crystal Cathedral, helping people who were troubled, in danger or contemplating suicide. In her later years, she became involved in the Eritrean refugee community in the Los Angeles area, tutoring and giving piano lessons.
Laura loved to travel, usually by Greyhound bus. Her extended travels included a trip to Alaska, several trips to Europe, a trip to the Holy Land with Ed, and mission trips to Ukraine and Russia where she distributed Bibles.
In 2010, Laura’s health began to deteriorate. When she could no longer live on her own, our “Lutheran Mother Teresa” moved back to Iowa and lived near a caring cousin in the Quad Cities area for several years. She then moved to an Assisted Living Facility in Madrid, IA, in 2014, where her oldest niece resides. Here Laura found comfort and peace in her final years.
She is survived by her sister, Arlyne Thomas, Woodland Park, CO, and many nieces and nephews and numerous cousins.
Laura was preceded in death by her husband, her parents, her brothers and sisters-in-law, Waldo and Chrystal Kruse, Lloyd and Mae Kruse, Aaron and Shirley Kruse and brother-in-law, Jim Thomas.
To order memorial trees or send flowers to the family in memory of Laura Krueger, please visit our flower store.