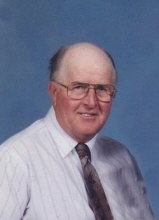 Visitation with the family present will be
from 5:00 7:00pm Wednesday, February 22, 2017
at the Vander Ploeg Funeral Home in Sheldon,
with a Christian Wake Service at 7:00pm and a Parish Rosary at 7:30pm

CONGREGATIONAL HYMNS
Be Not Afraid
Here I Am, Lord
Song of Farewell
How Great Thou Art
Cantor: Mary Donahue
Organist: Laura Wagner

After the graveside service, relatives and friends are invited to join
the family in the fellowship hall of the church for dinner

LEANDER H. PAPE
Leander Lee Henry Pape, the son of Stephan and Anna (Muhlenkord) Pape, was born on February 16, 1930 in Worthing, South Dakota. He moved with his parents to Sheldon in 1936 and attended elementary school and then they moved to the state of Washington, where he attended a Jesuit High School before moving back to Sheldon and graduated from Sheldon High School in 1947. Lee served in the United States Navy during the Korean Conflict on board the USS Helena from 1950 until his discharge in 1954. After his discharge from the service, Lee moved back to Sheldon and started driving over the road. On January 23, 1960, he was united in marriage to Esthermarie Schmit at St. Anthonys Catholic Church in Hospers, Iowa, the couple made their home in Sheldon. Lee owned and operated his own trucking company for over 40+ years, contracting his loads from companies like Holiday Express and others. Esther preceded him in death on January 27, 2006, Lee remained in his home for a few years, he then moved into the Beehive and in 2012, he moved to the Sanford Sheldon Senior Care in Sheldon. Lee passed away there on Monday, February 20, 2017 reaching the age of 87 years and 4 days.
Lee was a member of St. Patrick Catholic Church in Sheldon, the Sheldon Eagles Club and the McGlothlen-Cowie American Legion Post #145 of Sheldon. He had attended his 50th Naval Anniversary of the USS Helena in Las Vegas, NV on September 11, 2001. He enjoyed fishing, hunting, boating and restoring McCormick Deering Antique Tractors.
Those left to cherish Lees memory are his 3 children, Leann Pape and her husband, Bob Thompson of Palmer Lake, Colorado; Nonalee and her husband, Brad Gardner of Coralville, Iowa and Darren Pape of St. Louis Park, Minnesota; 2 grandchildren, Kathryn Anne and Anthony James Gardner; 7 brothers and sisters, Regina McCarty of Rockford, Illinois; Dolores Wunn of Estherville, Iowa; Theresa McCarty Albuquerque, New Mexico; Rudolf (Marian) Pape of Sioux City, Iowa; Anthony (Marlene) Pape of Sheldon, Iowa; Mary Pape of Omaha, Nebraska; and Annette (Patrick) Kelleher of Omaha, Nebraska; along with other nieces, nephews, relatives and friends.
Lee was preceded in death by his wife, Esthermarie; and his parents, Stephan and Anna Pape.

The Lord is my Shepherd; I shall
not want. He maketh me to lie
down in green pastures; He leadeth
me beside still waters. He
restoreth my soul; He leadeth me
in the paths of righteousness for
His names sake.
Yea, though I walk through the
valley of the shadow of death, I will
fear no evil; for Thou art with me;
Thy rod and Thy staff they comfort
me; Thou preparest a table before
me in the presence of mine enemies;
Thou anointest my head with oil,
my cup runneth over.
Surely goodness and mercy shall
follow me all the days of my life;
and I will dwell in the house of the
Lord forever.
To order memorial trees or send flowers to the family in memory of Leander 'Lee' H. Pape, please visit our flower store.