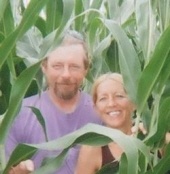 Visitation with the family present will be from
10:00am until the time of service at the
Vander Ploeg Funeral Home in Sheldon, Iowa.

Arrangements are under the care of the
Vander Ploeg Funeral Home; Sheldon, Iowa.
LEON K. ZEMBSCH
Leon Kent Zembsch, the son of Robert Thomas and Ruth Jeane (Eason) Zembsch was born on January 24, 1961 in Le Mars, Iowa. He grew up in Alton, Iowa and graduated from Alton Public School in 1980. Leon worked at several jobs throughout his career, Den Hartog Industries, Tecknetics Enterprises, Demco Mfg., Hyle Trucking, Meerdink Trucking, OC Sanitation and for the past 3 years at D&K Transportation of Ocheyedan, Iowa. Leon was united in marriage to Sherry L. Vogelaar on July 28, 2007 on their acreage near Ashton, Iowa. Leon passed away on Friday, January 13, 2017 at the Sanford Sheldon Medical Center in Sheldon, Iowa reaching the age of 55 years, 11 month and 20 days.
Leon enjoyed riding motorcycles, camping, fishing, boating, hunting, grilling and gardening with his famous homemade tomato racks. Leon had a great love for God's creations with his special love for his dogs Morgan, Stella, and Scooter. Along with his cats Sophia, Baily, and Addy Stash.
Those left to cherish Leons memory is his wife, Sherry; his mother, Ruth Zembsch of Alton, Iowa; 3 sisters and their spouses, Linda and Al Willett of Alton, Iowa; Melinda and Pat Winchell of Henderson, Nevada; Melissa and Mike Jensen of Iowa Park, Texas; his mother in-law Doris Vogelaar along with other relatives and friends.
Leon was preceded in death by his father, Robert Thomas Zembsch, father in-law Bill Vogelaar, brother in-law Billy Vogelaar and his loving dog Morgan.

Bikers Prayer
May the sun rise in front of me,
the rain fall behind me and the wind follow me.
May the Angels guard my travels
for they know what is ahead of me.
Keep me safe through rolling hills and swirling turns.
Let the eagle guide me to mountain tops.
Let the moons light guide through the night. Lord, thank you for letting me be a biker.
To order memorial trees or send flowers to the family in memory of Leon K Zembsch, please visit our flower store.