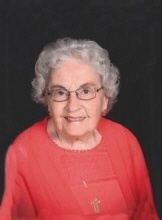 at the Vander Ploeg Funeral Home in Boyden, Iowa

I Wont Have to Cross Jordan Alone

Nearer My God To Thee

He The Pearly Gates Instrumental

at the Sheridan Township Cemetery

After todays service, relatives and friends are invited

to join the family in the fellowship hall.

Leona Mae Ver Meer, the daughter of Hubert and Lena (Verrips) Kleyne, was born October 9, 1924 in Boyden, Iowa. She attended country school and graduated from the Boyden High School in 1942. She went on to further her education by attending nurses training in Iowa City, Iowa. On March 5, 1947, she was united in marriage to John R. Ver Meer in Boyden, Iowa. After their marriage, the couple farmed northeast of Boyden. John preceded her in death on August 30, 2009 in Sheldon. Leona moved to Spencer, Iowa in August of 2013 to be closer to her daughter, Ellen. Leona passed away on Friday, October 20, 2017 at the Highland Apartments in Spencer, reaching the age of 93 years and 11 days.

She was a long-time member of the First Reformed Church in Boyden and more recently the Hope Reformed Church of Spencer with a heart for giving. She wore many hats during her lifetime as a daughter, sister, sister-in-law and wife. Her career was to provide a loving and nurturing home to her husband, children, grandchildren and great-grandchildren. She had a penchant for the power of words and loved playing games.

She was preceded in death by her husband, John; her parents, a son-in-law, Dennis Riepma; and 2 sisters, Wilma Brink and Margaret Ver Meer.

my hope comes from him.

Truly he is my rock and my salvation;

he is my fortress, I will not be shaken.

My salvation and my honor

depend on God; he is my mighty rock,

my refuge. Trust in him at all times,

you people; pour out your hearts to him, for God is our refuge.

Psalm 62: 5-8
To order memorial trees or send flowers to the family in memory of Leona Mae Ver Meer, please visit our flower store.