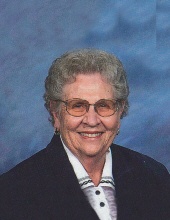 Visitation
with the family present will be 1 hour prior to the service
on Wednesday, February 13, 2019
at the Vander Ploeg Funeral Home
in Sheldon, Iowa

After the graveside service relatives and friends
are invited to join the family
in the fellowship hall of the
First Reformed Church ~ Sheldon, Iowa.

Leora Jean Koele the daughter of Herman and Kathryn (Sinema) Erkes was born August 20, 1922 in Sheldon, Iowa. She received her education in Sheldon and graduated from Sheldon High School. On October 24, 1941, she was united in marriage to Gerald Henry Koele in Sheldon, Iowa. After their marriage the couple operated feed, produce and had a hatchery business in both Hull and Sheldon. They later operated the Montgomery Ward Catalog Store in Sheldon for many years before their retirement. Her husband preceded her in death on December 9, 1992 in Sioux City, Iowa. After her husband’s passing, she remained in the family home until moving to the Christian Retirement Home in Sheldon, later living at Fieldcrest Assisted Living in Sheldon, Iowa for a couple of years. Since March of 2017, she had been a resident of the Prairie View Retirement Home in Sanborn, Iowa. She passed away on Monday, February 4, 2019 at Prairie View reaching the age of 96 years, five months and fourteen days.
She was a long-time member of the First Reformed Church in Sheldon and she enjoyed spending time with her family.
Leora is survived by her two sons, Dennis Alan Koele and his friend, Sue Knudson of Apple Valley, Minnesota and Douglas Hein Koele and his wife, Jane of West Des Moines, Iowa; two granddaughters, Lindsey (Tom) Schmidt and Jennifer (Jordan) Fuehrer; 2 great grandchildren, Owen and Cecilia; also other relatives and friends survive her.
She was preceded in death by her husband, Gerald, a grandson, Brandon, her parents, and a sister and her husband, Vera and Ralph Kamphoff.
To order memorial trees or send flowers to the family in memory of Leora J. Koele, please visit our flower store.