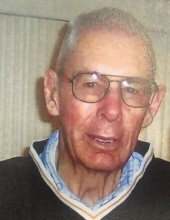 Visitation
will be from 3 – 5 P.M. on Saturday, May 23, 2020
at the Eldridge Family Funeral Home in Paullina.
There will be no family present during this time.

Due to state and federal guidelines due to COVID-19 there will be a limit of ten people at a time during visitation, practicing social distancing.

CONGREGATIONAL HYMNS
“How Great Thou Art”
“Abide With Me”
“I Know That My Redeemer Lives”
“What a Friend We Have In Jesus” Organ Recessional
Organist: Angela Johannsen

LESLIE C. MILLER
Leslie Charles Miller was born on August 26, 1927 in Caledonia Township, near Paullina, Iowa, the son of Charles and Hilda (Tesch) Miller. He grew up on a farm near Cleghorn, Iowa where he received his education in a country school. Leslie was called in the Army and served his country from March 22, 1946 until his discharge on September 22, 1947. Leslie married Joan Menke on November 24, 1950 at the Little Brown Church in Nashua, Iowa. He farmed for 42 years near Cleghorn.
Leslie loved the Lord and served in various roles at Zion Lutheran Church in Paullina including 3 years as Trustee, and 3 years as Elder. Leslie was an avid sports fan and he enjoyed the Iowa Hawkeyes, the Green Bay Packers, and the Minnesota Vikings. He was also interested in all automobiles and has vast knowledge of their workings.
Leslie is survived by his daughter, Roxane Becker (Doug) of Maumelle, Arkansas and their sons, Adam and Alex (Ada); grandsons Bill, Tom and John Harrison and great grandchildren Jack and Kamryn Harrison. He is also survived by his sisters, Lila Hucke and Linda Stanley (Byron) of Sioux City, Iowa and a sister-in-law, Jodene Jongma (Stan) of Spencer, Iowa and many nieces and nephews.
He was preceded in death by his wife, Joan on July 23, 2005; a daughter, LaDonna Harrison and her husband, Garry, his parents, a sister, LuVerne; niece, Monica and brother-in-law, Hugo.

In Lieu of Flowers memorials may be directed to the
Zion Lutheran Church in Paullina
To order memorial trees or send flowers to the family in memory of Leslie C. Miller, please visit our flower store.