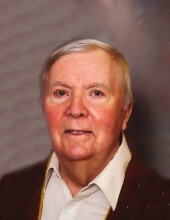 Leslie “Les” W. Richter
Granville, Iowa
Services for Leslie “Les” W. Richter, age 93, of rural Granville who passed away on Wednesday, November 11, 2020 at Prairie View Home in Sanborn. His graveside service will be held at 10:30 A.M. on Wednesday, November 18, 2020 at Prairie View Cemetery in Paullina with military rights presented by Russell West Post of the American Legion.
Visitation with family present will be from 5 – 7 P.M. on Tuesday, November 17, 2020 at the Eldridge Family Funeral Home in Paullina.
Masks are required for both the visitation and the graveside service. Social distancing guidelines will be followed as well.


Leslie Walter Richter the son of Walter and Nellie (Jurgensen) Richter was born December 9, 1926 in Caledonia Township, O’Brien County, Iowa. He received his education in country school near Gaza, Germantown, and high school in Paullina. On September 25, 1949 he was united in marriage to Maxine “Deanie” Rogers at the Zion Lutheran Church in Paullina. The couple started farming in the Paullina area for Les’ dad Walt until 1952 when Les was called into the service. Les was stationed in Virginia where Deanie joined him. The couple returned to Paullina in 1954 and again Les worked for his dad, Walt until 1958 when the couple started farming on their own outside of Granville, Iowa. They remained farming until their retirement in 1992. The couple remained on the family farm until 2011, when they moved to the Prairie View Retirement Home in Sanborn, Iowa. Deanie preceded Les in death on November 24, 2016 at Prairie View. Les continued to make his home at Prairie View and passed away there on Wednesday November 11, 2020 reaching the age of 93 years 11 months and 2 days.
He was baptized at his parent’s home and later confirmed at St. John Lutheran Church in Germantown and was currently a member of the First Presbyterian Church in Paullina. He was a member of the Russell West Post of the American Legion of Paullina. He enjoyed the family farm, traveling, bowling, dancing and coached little League baseball.
Les is survived by a daughter Sandy Pearson of rural Granville, Iowa; four grandchildren Lezlie Pearson and Amanda (Lee) Moerman both of Orange City, Iowa; Elizabeth Siepka of Colton, South Dakota and Andrew Pearson of rural Granville, Iowa; seven great grandchildren Michael, Jonathan, Jessica Moerman, Curtis and Lukaus Pearson, Skylar and JR Siepka a brother and his wife Bob and Rita Richter of Paullina also other relatives and many friends.
He was preceded in death by his wife Maxine “Deanie” son Blair Richter on August 17, 2020; son-in-law Carvell Pearson, grandson-in-law Nik Siepka, parents , sister and her husband Alice Mae and Donald Carnahan and nephews Vance Nielsen Blake Nielsen and Lance Carnahan.
To order memorial trees or send flowers to the family in memory of Leslie "Les" Richter, please visit our flower store.