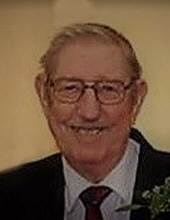 REJOICING IN THE MEMORY OF
LESLIE W. DAU

Visitation with family present will be from
3 - 5 P.M. on Sunday, May 6, 2018
at the Eldridge Family Funeral Home in Paullina.

MUSIC
“I’m But A Stranger Here”
Sung by: David Brown
CONGREGATIONAL HYMNS
“Let Us Ever Walk With Jesus”
“Amazing Grace”
“What A Friend We Have In Jesus”
Organist: Joyce Hibbing

After today’s graveside service, relatives and friends
are invited to join the family at the
Germantown Community Building.

Arrangements are under the care of the
Eldridge Family Funeral Home; Paullina, Iowa.
LESLIE “LES” W. DAU
Leslie William Dau, the son of Herman and Emma (Hensel) Dau, was born August 2, 1929 in Ida County, Iowa. He was baptized and confirmed February 16, 1947, at St. Paul Lutheran Church, Holstein, Iowa. He received his education in country school thru the 8th grade and graduated from Holstein High School in 1947. He worked for Heitman trucking firm in Holstein until he was called to service in November of 1950. He served in the Korean Conflict from April 1951 until March 1952. He received 2 battle stars and the bronze star. He was discharged in August 1952. On March 30, 1952, he was united in marriage to LuEtta Mae Mesner at St. John Lutheran Church in Germantown, Iowa. They settled on a farm southeast of Germantown and started his farming career for the next 40 years. During that time they had 4 children. They retired to Main Street in Paullina in 1993. After his retirement from farming he worked for Farmers Mutual Insurance Company as a crop hail adjuster for 12 years. He also delivered pharmacy prescriptions during those years. LuEtta preceded Les in death on April 2, 2014. Leslie passed away at the Orange City Hospital, Tuesday, May 2, 2018 reaching the age of 88 years and 9 months.
Leslie was a member of St. John Lutheran Church serving as an elder and holding various other offices. He was a longtime member of the Paullina American Legion and past commander. He served on the Board of Directors for the Farmers Coop Elevator for 15 years. He loved woodworking projects and made many beautiful furniture pieces and picture frames for relatives and friends.
Those left to mourn his passing are his three children: Marcia and her husband, Duane Ryken of Sioux Falls, SD; Pastor Lynnford and his wife, Ginger Dau of Paullina, IA and Nathan and his wife, Wendy Dau of Cocoa, FL; four grandchildren, Tricia and her husband, Matt Nussbaum of Sioux Falls, SD; Matthew and his wife, Amber Ryken of Sioux Falls, SD; Leann and her husband, Kyle Terry of Hudson, WI; Carrie Dau of Sioux Falls, SD; four great grandchildren, Everett and Emmett Ryken, Benjamin and Madilynn Roberts. Two sisters, Myrtle Goettsch of Holstein, IA and Mary and her husband, Robert Hahn of Cherokee, IA. Two sisters-in-law, Deloris Dau of Holstein, IA and Geri (Dau) Susie of Cushing, IA. Also, a host of other relatives and friends.
He was preceded in death by his wife, LuEtta and infant daughter, Jennifer, his parents, Emma and Herman and brothers, Clarence and Vernon.

No More Pain and Grief

God shall wipe all tears from their eyes;
and there shall be no more death,
nor crying,
neither shall there be any more pain:
for the former things are passed away.

Revelation 21: 4
To order memorial trees or send flowers to the family in memory of Leslie "Les" W. Dau, please visit our flower store.