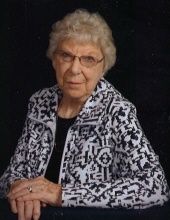 Services for Lila L. Hucke, age 92, of Sioux City formerly of Cherokee who passed away on Thursday, September 29, 2022, at MercyOne in Sioux City, Iowa. Her funeral service will be 11:00 A.M. Wednesday, October 5, 2022, at Trinity Lutheran Church in Cherokee with Rev. Jonathan Riggert ~ officiating.

Visitation with family present will be from 5 to 7 P.M. on Tuesday, October 4, 2022. A prayer service will be held at 7 P.M. all at the Eldridge Family Funeral Home in Paullina.

“What A Friend We Have In Jesus”

In lieu of flowers, memorials may be directed to The Lutheran Hour or The Good Shepherd Hour.

Lila, the daughter of Charles and Hilda (Tesch) Miller was born on November 7, 1929, in Cherokee County. She was baptized on November 24, 1929, at St. John Lutheran Church in Germantown, Iowa. She was confirmed on May 21, 1944, at Zion Lutheran Church in Paullina. Lila was currently a member at Trinity Lutheran Church where she was for many years. Lila received her education in a country school in Liberty Township. She attended Cleghorn High School graduating in 1948.

She worked for a few years at the Cherokee Mental Health Institute where she met George Jones. Lila was united in marriage to George Jones on June 5, 1954. They were blessed with two children, Carol, and Scott. They later divorced. In 1981, Lila went to work at Sioux Valley Hospital in Cherokee and retired in September 1996. On November 20, 2003, Lila married Hugo Hucke. Hugo passed away on November 2, 2008. She moved to the Brookdale Assisted Living in Sioux City in October of 2013. And had made her home at Heritage of Northern Hills in Sioux City since 2021.

To order memorial trees or send flowers to the family in memory of Lila L. Hucke, please visit our flower store.