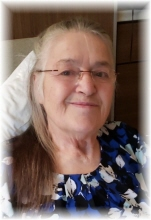 Linda Bolyard, age 71, of Spencer, Iowa, passed away on Saturday, January 4, 2020 at Avera McKennan Medical Center in Sioux Falls, South Dakota. Memorial Services will be Thursday, January 9, 2020 at 11:00 A.M. at the Andringa Funeral Home Sheldon Funeral Service in Sheldon. Rev. Ken Snyder officiating. Burial will be at a later date. Visitation will be prior to the Memorial Service on Thursday, from 9:00 A.M. to 10:45 A.M. at the Andringa Funeral Home Sheldon Funeral Service in Sheldon. Linda Ellen (Mixon) Bolyard, the daughter of Ogene and Ann (Gorter) Monen was born June 26, 1948 in Eugene, Oregon. As a child, she moved with her parents to Boyden, Iowa, then moved to California. She was united in marriage to Edward Mixon in Clinton, Oklahoma on April 28, 1972. Linda moved to many towns in California, Anaheim, Norco and Corona, California where she worked many jobs to keep her children in Christian school. In September of 1985, Linda moved her children to Sheldon, Iowa to be closer to family. She was employed by Aalfs Manufacturing, RV Central, Glenn's Sports Center and she started her own cleaning business, Sparkle Cleaning Service. In 1990, Linda moved with her son Jason to Spencer, Iowa to work as a CNA at Long House, retiring in 2013. Linda was a member of the Assembly of God in Sheldon and Spencer. Linda enjoyed sewing and oil painting portraits. She was creative and very good at being resourceful and nothing went to waste. She enjoyed planting flowers and spending time outside. Her most favorite hobby was spending time with her grand kids, teaching them how to sew, sing gospel songs, make crafts and getting them to laugh. Linda passed away on January 4th, 2020 at a Avera McKennan Medical Center in Sioux Falls, South Dakota. Linda was preceded in death by her husband, Ed Mixon; her parents, Ogene and Ann (Gorter) Monen; her biological father, Robert C. Lloyd; her grandson, Michael; and her sister, Patricia Mae. Those left to cherish her memories are her 2 children, Mindi (Jeff) Hulley Boyden, Iowa, and their children, Kristie, Mikayla, Jessica, and Jordan; Jason Idtensohn Spencer, Iowa and his children, Isaiah, Matthew, Noah, Anna, and Jasmine; 5 great grandchildren; 6 siblings and many wonderful nieces and nephews. In Loving Memory Of Linda Bolyard Born: June 26, 1948 Passed Away: January 4, 2020 Age: 71 years, 6 months and 9 days MEMORIAL SERVICE Thursday, January 9, 2020 at 11:00 A.M. Andringa Funeral Home Sheldon Funeral Service Sheldon, Iowa OFFICIATING Rev. Ken Snyder MUSIC Songs on CD "As the Deer" "He Has Made Me Glad" Burial will be at later date. ARRANGEMENTS BY Andringa Funeral Home Sheldon Funeral Service Larry R. Andringa, Funeral Director

To order memorial trees or send flowers to the family in memory of Linda Bolyard, please visit our flower store.