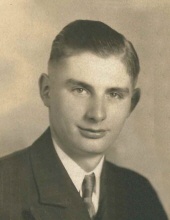 Born September 24, 1920 in O’Brien County, Iowa Lloyd spent his youth in the towns of Primghar and Calumet. Graduating at age 16 from Calumet in 1936. After attending mechanic school in Chicago, Illinois he returned to Calumet missing his girlfriend, proposed, married LaVera Dorothy Teresa Schmidt on December 1, 1940 being each other’s love for 77 years. They moved to a farm by Calumet, Lloyd farmed the land for 62 years many of those years with son, Darrell. A quiet man by nature only time heard words (#?*!) was when sorting and moving hogs. He semi-retired and moved to Calumet working for the city of Calumet and Willow Way in Sutherland.
For leisure he enjoyed playing baseball, bowling, cards and golf until into his eighties getting a hole in one in Sioux Rapids, Iowa. Lloyd was very involved in Zion United Church of Christ where he taught Sunday School and was Sunday School Superintendent.