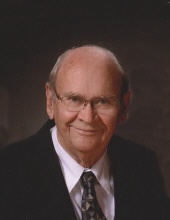 IN LOVING MEMORY OF
LOUIS “LOUIE” A. LANGE

Visitation
with the family present will be from
5 to 7 P.M., Tuesday, July 16, 2019
at the Eldridge Family Funeral Home in Paullina.

Arrangements under the care of the
Eldridge Family Funeral Home; Paullina, Iowa
Louis “Louie” Arthur Lange, the son of Arthur and Hilda (Strampe) Lange was born in rural Gaza, Iowa on October 11, 1927. He attended country school at Gaza and Germantown, Iowa and one semester at Paullina Community School when he had to quit to help his father farm, as the hired man left to go off to war. Louie served in the U.S. Army from April 11, 1946 until April 3, 1947 as a Pvt. T/5 being stationed in the Philippines. He drove all types of vehicles hauling supplies, personnel and other articles. He was discharged receiving the W.W. II Victory Medal. After his discharge he returned to Paullina. On April 16, 1950 he was united in marriage to Marveen Mae Hopkins at the St. John Lutheran Church in Germantown. The couple were blessed with four children Patsy, Greg, Jim and Jodene. Their married life was spent on the family farm east of Germantown until they moved into Paullina in 1989. While Louie was farming, he also got a job as a Postal Service rural mail carrier where he worked until his retirement. Even after retirement, he enjoyed going out to the family farm to help son Jim.
Louie was baptized on October 30, 1927 and later confirmed on July 6, 1941 and was a member of the St. John Lutheran Church in Germantown and served as a trustee. He was a 35-year member of the Germantown Fire Department which he helped establish and was a member of the Russell West Post of the American Legion. Louie enjoyed many things in life, like coaching both his sons in Little League baseball, teaching his sons, grandsons, and great grandsons how to fish. He enjoyed bowling, playing Schafkoft, being a prankster and always telling great stories. Marveen preceded him in death on August 30, 2012. He remained in the family home until April 13, 2018, when he became a resident of Pearl Valley Nursing Home in Sutherland. On Saturday July 13, 2019 Louie passed away at the Orange City Area Health System reaching the age of 91 years, 8 months and 2 days.
Left to cherish his memory are his children, Patsy (Larry) Schwebach of Paullina; Greg Lange of Spencer; Jim (Brenda) Lange of Paullina and Jodene (Lonnie) Woock of Spencer; 8 grandchildren, Tracy (Gene) Frerk of Nevada, IA; Mike (Sopfie) Schwebach of Sioux Center, IA; Chris (Dorothy) Lange of Des Moines, IA; Kari (Patrick) Kent of Altoona, IA; Jamie (John) Ingledue of Spencer, IA; Lindsey Woock, Jesse Woock, and Lucas Woock all of Spencer, IA; great grandchildren, Marcus (Amanda) Frerk, Travis Frerk, Kyle (Chantel) Frerk, Wyatt Frerk, Ava Frerk, Miranda (Brian) Jarman, Brenna Lange, Lenny Lange, Brady Kent, Harper Kent, Isaiah Ingledue and Brody Woock; great great grandchildren Ty and Chrysi Frerk, Hazel Marveen Frerk, Braya and Hesston Jarman; his sister Verlie Hibbing of Houston, TX; brother and sisters-in-law, Keith Hopkins, Jeanette Endorf, Marian Andersen, Butch (Dayle) Hopkins, Nancy Huff, Jean (Phil) Snyder and Jane (Ken) Conaway; numerous nieces, nephews, extended family and friends.
Louie was preceded in death by his wife, Marveen, parents, Art and Hilda, sister and brother-in-law, Myrne and Bill Ruchensky; brother-in-law, Walter Hibbing, parents-in-law, Murvin and Marie Hopkins, sisters-in-law, Gretchen Louderback and Madeliene Hopkins, brothers-in-law, Warren Louderback, Arley Endorf and Bob Huff.
To order memorial trees or send flowers to the family in memory of Louis A. Lange, please visit our flower store.