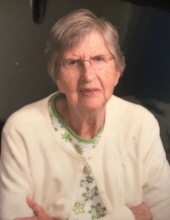 Services for Lucille Koster, age 96, of Linn, Missouri formerly of Sheldon who passed away on Tuesday, January 12, 2021 at General Baptist Nursing Home in Linn, Missouri. A private family service will be held on Monday, January 18, 2021.
Burial will be at East Lawn Cemetery.
Arrangements are under the care of the Andringa Funeral Home - Sheldon.


Lucille Koster, nee Zylstra, passed from this life on January 12, 2021 while residing at the General Baptist Nursing Home in Linn Missouri.
She was born in the country of the Netherlands, the province of Friesland, in the town of Suawoude on January 20, 1924. Her parents were Herman and Wilma Zylstra. She was the second to the oldest of seven kids. After surviving German occupation during WWII while her family hid Jews from the Holocaust, she came to America in 1948. About the time she learned to speak English, she married Bernard Koster on June 1, 1949 in Sheldon Iowa. She gave birth to six children: Judy in 1951, Roger in 1954, John in 1956, Donald in 1957, Richard in 1960, and Connie in 1962. From these children she was blessed with 17 grandchildren, 59 great grandchildren, and 2 great-great grandchildren!

Lucille was proceeded in death by her parents, husband, two brothers, and a grandson. During her time in America she worked in a lawyer’s office, a towel laundry, as a college cook, a store clerk, and as a farmer. She worked at Aalfs Manufacturing from 1972 until she retired in 1990. After retirement she enjoyed traveling and camping with her kids and grandkids. She loved attending their sporting events and being their biggest fan.

She sold her home in Sheldon and moved to Linn, Missouri in May of 2005. In January 2014 she fell and broke her hip. Trying to recover from this accident she was admitted to the General Baptist Nursing Home on March 3, 2014. After recovery she decided to continue living under their good care.

Lucille was a dedicated and active Christian attending the non-denominational Christian Church. She knew her Bible very well and was always willing to evangelize or encourage someone to get their life right with Jesus. She was very proud of her Dutch heritage as well as the fact that she came to America and became a United States citizen. But most of all, she was proud to be a Christian, a child of God, living a holy life while serving the Lord Jesus Christ her Savior.
To order memorial trees or send flowers to the family in memory of Lucille Koster, please visit our flower store.