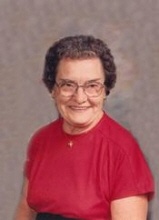 Visitation will be after 4:00 P.M. Friday, February 8, 2013 with the family present from 5 to 7 P.M. at the Eldridge Family Funeral Home in Paullina, Iowa.

After today’s service relatives and friends are invited
to join the family at the Germantown Community Center.

Arrangements under the care of the:
Eldridge Family Funeral Home; Paullina, Iowa
LUCILLE M. KRUSE
Lucille Mildred Kruse, the daughter of Alfred and Esther (Protatz) Pauling was born January 24, 1927 in O’Brien County, Iowa. She received her education at St. John Lutheran School in Germantown, Iowa. On September 21, 1947 she was united in marriage to Lorenz D. Kruse at the St. John Lutheran Church in Germantown. After their marriage the couple farmed near Germantown for many years until moving into Germantown in July of 1981. While in Germantown the couple were janitors at the St. John Lutheran Church. Her husband preceded her in death on November 25, 1994 in Germantown. Lucille continued to make her home in Germantown as well as being the janitor until the age of 82 when she retired. She moved to the Beehive Assisted Living in Sheldon and lived there a few years until moving to Emmetsburg to the Lakeside Lutheran Home. She passed away on Tuesday February 5, 2013 at the Lakeside Home reaching the age of 86 years and 11 days.
She was baptized on January 30, 1927 and later confirmed on July 6, 1941 and was a lifelong member of the St. John Lutheran Church in Germantown, where she sang in the choir and was active in Ladies Aid. She was involved in quilting for world relief and delivered baskets to the nursing home. She was also a member of the L.W.M.L. and enjoyed time with family, gardening, her flowers, quilting and crocheting.
Lucille leaves to cherish her memory her children: Brian and his wife Bonnie Kruse of Canistota, South Dakota; Fred Kruse of Paullina, Iowa and LuAnn and her husband Dale Opheim of Graettinger, Iowa; 12 grandchildren, 7 great grandchildren and a host of other relatives and friends.
She was preceded in death by her husband, infant daughter Cheryl, parents and one brother Leonard Pauling.
Memorials may be directed to: St. John Lutheran Church in Germantown; Lakeside Lutheran Home in Emmetsburg and the Alzheimer’s Association.
To order memorial trees or send flowers to the family in memory of Lucille M. Kruse, please visit our flower store.