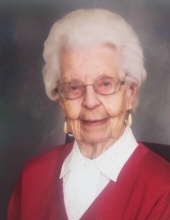 After today’s service, relatives and friends are invited
to join the family at the Laue Building in Paullina City Hall.


Luetta Elise Carlson, the daughter of William and Adela (Thoms) Meyer was born on March 6, 1915, the oldest of 3 girls, and was raised on her family’s first farm outside of Gaza. She attended country school for seven years and then the Calumet school through the 9th grade. She met her future husband, Francis Carlson at a country dance held at Liberty Hall. They were married on April 26, 1941 at their pastor’s parsonage. Luetta and Francis had two children, Rodney and Linda. Luetta helped her husband on the farm while she raised their children. She milked cows, seeded oats, fixed fences, canned goods, gardened and patched clothes. After the couple retired, they moved into Paullina. Francis preceded Luetta in death on August 3, 1991. Luetta remained in town until moving to Prairie View Manor in March of 2015. Luetta passed away at Prairie View on Monday, December 30, 2019 reaching the age of 104 years, 9 months and 24 days.
Luetta was a member of First Presbyterian Church in Paullina. She loved to cook, play cards and go to dances. Luetta especially enjoyed her grandchildren. She enjoyed playing 500 and Kings Corner with her special friend, Gloria and sister, Blanche. She enjoyed traveling, especially to Hawaii. Luetta knew everyone by name until she passed.
Left to cherish Luetta’s memory is her children and their spouses, Rodney and Kaye Carlson of Paullina and Linda and Larry Poppema of Lincoln, Nebraska; 6 grandchildren; twenty great grandchildren and nine great-great grandchildren. She was also survived by other relatives and friends.
Luetta was preceded in death by her parents; husband, Francis; two grandchildren, Robin and Mark Carlson and two sisters, Helen and Blanche.
To order memorial trees or send flowers to the family in memory of Luetta E. Carlson, please visit our flower store.