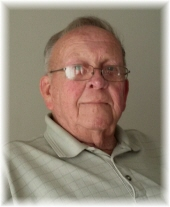 Lyle Askeland, age 83, of Sanborn, Iowa, passed away on Saturday, February 24, 2018 at his home in Sanborn. Visitation will be Saturday, March 3, 2018 at Jay's Restaurant in Sanborn from 5:00 to 7:00 P.M. There will be no memorial service. Private burial will be at a later date in Roseland Cemetery in Sanborn, Iowa. Lyle Merlyn Askeland of Sanborn, Iowa, passed away at his home on Saturday, February 24th at the age of 83 years. Lyle was born on August 18, 1934 to Lyle and Mable (Opsal) Askeland of Armstrong, Iowa. In 1952 Lyle graduated from Armstrong High School then went on to continue his education at Waldorf College in Forest City, Iowa. On February 14, 1987, Lyle was united in marriage to Joann Epping and was able to celebrate 31 wonderful and loving years together. Lyle and Joann built their life together in Sanborn, Iowa. Lyle was a devoted farmer in the Armstrong area for several years before moving on to be the assistant manager at Bomgaars in Sheldon. Lyle enjoyed spending his life surrounded by his wife, children, grandchildren, and friends. Lyle was an avid Iowa Hawkeyes and New York Yankees fan, enjoyed watching Old Westerns, and spending time with his coffee buddies at Jay's Restaurant. He was a member of the American Lutheran Church. After retiring in 2001, Lyle and Joann spent the next nine years wintering in Mesa, Arizona. However, after nine winters away, they decided to brave the cold winters of Iowa once again, and spent them at their home in Sanborn. Lyle will be lovingly remembered by his wife, Joann Askeland of Sanborn, IA; Lyle's five children, Greg (Susan) Askeland of Solon, IA, Kim Thomsen of Griswold, IA, Shawn (Sherry) Askeland of Griswold, IA, Todd (Nancy) Askeland of Atlantic, IA, Tina (Kevin) Sindt of Griswold, IA; his step-son, Mike (Laura) Epping of Grain Valley, MO; his step-son, Dana Epping of San Diego, CA; his step-sister, Betty (Pete) Rush of St. Paul, MN; his sister-in-law, Betty Baldwin of Forest City, IA; his brother-in-law, Larry (Mary) Conley of Omaha, NE; his brother-in-law Gerry Gunderson of Columbia, IN; along with his 20 grandchildren and 17 great-grandchildren. Lyle was preceded in death by his parents; his sister, Lorraine; his sister, Marlene (Gerry) Gunderson; his step-sister, Mary Paulsen; and his grandson, Willy Tridle.

To order memorial trees or send flowers to the family in memory of Lyle Askeland, please visit our flower store.