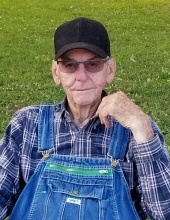 Lyle N. Mosier, age 85, of Sheldon who passed away on Thursday, February 24, 2022 at Sanford Senior Care in Sheldon. His services will be on Tuesday, March 15, 2022 at the Calvary Baptist Church in Sheldon, Iowa.

Visitation with the family present will be from 5:00 – 6:15 P.M. at the Calvary Baptist Church.

Private family burial will be at a later date.

Arrangements are under the care of the Andringa Funeral Home; Sheldon, Iowa.
Online condolences may be sent to www.vanderploegfunerals.com

Lyle N. (Bud) Mosier passed away peacefully Thursday, February 24, 2022 at Sanford Senior Care in Sheldon, IA.
Lyle was born August 12, 1936 to Lyle and Eva (Whyte) Mosier in Lake Benton, MN. He attended elementary through high school at Lake Benton Schools. From 1953 to 1956, he worked for the Milwaukee Railroad. He also served in the National Guard during this time, being honorably discharged Jan 15, 1956. December 28, 1955, Lyle married the love of his life, Betty (Jaques) Mosier. To this union God blessed them with 6 children. They made their home in rural Lake Benton. Lyle farmed and later started his own Heavy Equipment Company. In 1981, Lyle sold his business. They moved to Sheldon, IA. Lyle taught heavy equipment at NCC, and received his Associated Degree during this time.

He retired from teaching in 1998. Lyle and Betty began a life of traveling in their RV in 1998. They became members of “Sowers” (Servants on Wheels Ever Ready) doing mission work in various parts of the United States. He had built a tool box that filled the bed of his pickup, so he was prepared for any job they had for him. In 2010 they began wintering in Pharr, TX and summers they lived on their son’s farm near Sanborn.

Lyle was born again in 1978 by accepting Jesus at his personal Savior. He was an active member of the Baptist Church in Lake Benton where he taught was a deacon, and taught Sunday School. While living in Sheldon, he was an active member of Calvary Baptist Church, where he served as deacon and enjoyed working on many projects with his church family. Lyle also loved his church family at Grace Community Church in Pharr, TX and continued his service there doing whatever was needed.
Lyle lost his loving wife of nearly 63 years in December of 2018. He then moved back to Sheldon, and continued wintering in Killeen, TX. He moved to Sanford Senior Care in the fall of 2021. Lyle enjoyed woodworking projects, tractor pulls, and doing chores on the farm, as well as camping and fishing with his family.

To order memorial trees or send flowers to the family in memory of Lyle "Bud" N. Mosier, Jr., please visit our flower store.