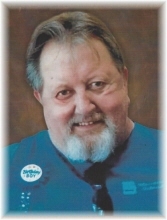 Lyle W. Beckman Sr., age 70, of Cherokee, Iowa, formerly of Sheldon, Iowa, passed away on Sunday, May 15, 2016 at his home in Cherokee. Memorial Services will be Thursday, May 19, 2016 at 10:00 A.M. at the Andringa Funeral Home Sheldon Funeral Service in Sheldon. Burial to follow at St. Pauls Lutheran Church Cemetery in rural Hull, Iowa. Visitation will be Wednesday, May 18, from 1:00 to 8:00 P.M. with the family present from 5:00 to 7:00 P.M. at the Andringa Funeral Home Sheldon Funeral Service in Sheldon. Lyle Wilfred Beckman, Sr. was born on December 22, 1945 in Joplin, Missouri. He was the son of Wilfred and Floreda (Heemskirk) Beckman. He lived his youth in Hull, Iowa where he attended Boyden Hull Community School, graduating from high school. He was united in marriage to Harriet "Happy" Harnack of Sheldon, Iowa on July 15, 1967 in Sheldon. Shortly thereafter, Lyle enlisted in the United States Navy where he was assigned to CB53 and was deployed to Vietman. He returned home in 1968 and was honorably discharged in 1969.They came back to Sheldon and Lyle was employed by Well's Blue Bunny delivering milk for many years. They moved to Sioux City where Lyle was a car salesman until they moved back to Sheldon where they owned and operated Beckman Gas and Grocery for eight years. Lyle then worked for Drenkow Motors and later was a parts salesman for Lawson Products until retirement. During retirement Lyle spent a lot of time serving as the Commander of Sheldon American Legion Post # 145. Lyle and Happy enjoyed traveling to Apache Junction, Arizona. Happy passed away on April 3, 2013. After Happy's death Lyle spent the winters in Arizona. Lyle enjoyed being around his family. His hobbies included bowling, golfing, playing gin rummy and pitch. He would get very excited when he won. He also enjoyed small construction projects for family and friends. Due to complications of agent orange he encountered in Vietnam, Lyle passed away on Sunday, May 15, 2016, at his home in Cherokee, surrounded by his family. Those left to cherish his memories are his children: Lyle Jr. and wife Jennifer Beckman of Renner, SD and children, Cade, Emma, and Reiley; Julie and husband Lee Dolphin of Cherokee, IA and children, Riley and Shelby; Sheila Toms and special friend Floyd Twyman of Lytton, IA and children, Ashley and son Sawyer, Matt, Ayden, Olivia, Sophie and Wesley; Chad Beckman and special friend Alese Walter of Edgar, MT and children, Isabella and Remington; one sister, Beverly and husband Bob Hughes of Petaluma, CA. He was preceded in death by his wife, Happy; his parents, one brother, Warren Keith Beckman; one grandson, Marcus Paul Toms. In Loving Memory Of Lyle W. Beckman, Sr. Born: December 22, 1945 Passed Away: May 15, 2016 Age: 70 years, 4 months and 23 days MEMORIAL SERVICES Thursday, May 19, 2016 at 10:00 A.M. Andringa Funeral Home Sheldon Funeral Service OFFICIATING Rev. Herman Klarenbeek MUSIC Keyboard: Luann Donkersloot Congregational Songs: "The Old Rugged Cross" "Amazing Grace" CD Music: "Go Rest High On That Mountain" "Victory In Jesus" INTERMENT St. Paul's Lutheran Church Cemetery, rural Hull, Iowa MILITARY HONORS American Legion Post # 145, Sheldon, Iowa Following interment, the family invites all for fellowship and lunch at the Sheldon Community Center. ARRANGEMENTS BY Andringa Funeral Home Sheldon Funeral Service Larry R. Andringa, Funeral Director

To order memorial trees or send flowers to the family in memory of Lyle W. Beckman, please visit our flower store.