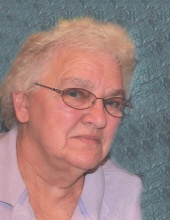 Arrangements are under the care of the Vander Ploeg Funeral Home in Sheldon, Iowa.
Online condolences may be sent to www.vanderploegfunerals.com

Lynda Kay Huisman, the daughter of Fredrich and Lelah (Pitts) Kruckenberg was born on May 16, 1931 in Sanborn, Iowa. She graduated from Sanborn High School and after graduation attended trade school and took many classes at NCC. On February 10, 1951, Lynda was united in marriage to Donald Huisman in Jackson, Minnesota. Lynda moved to California with Don while he served in the Navy. The couple moved back to Sheldon in 1955. Lynda raised her three children and worked alongside Don as a bookkeeper for Huisman Lock and Key from 1956 until retiring in 2010. Don preceded Lynda in death on April 12, 2011 in Hartley. Lynda remained in Sheldon until moving to Community Memorial Health in Hartley in September of 2018 where she passed away on Tuesday, November 20, 2018 reaching the age of 87 years, 6 months and 4 days.
Lynda was a member of Parkview Assembly Church in Sheldon until 1997 and joined the Sheldon United Methodist Church in 1997. She served on the hospital auxiliary from 1985-2007 where she made over 2200 bibs for new babies. She also was a hospice volunteer, served on the library board and board of adjustments and also team-taught adult literacy.
Left to cherish Lynda’s memory is her children, Terry and his wife, Sarah Huisman of Sheldon, Iowa; Jeri Postma-Clayton and husband Danny Clayton of Sheldon, Iowa and Jan Huisman of Ocala, Florida; seven grandchildren, Ben and Katie Huisman, Angela and Eric Burnette, Melissa and Chad Adams, Erica and Dennes Dorantes and Jeremiah and Jessica Postma, Tyrone Fude and Roman Fude; eighteen great grandchildren; also, other relatives and friends.
Lynda was preceded in death by her parents; a still born child; son-in-law, Mark Postma; daughter-in-law, Mary Huisman; grandson, Aaron Scheerhoorn and brothers, Dale Kruckenberg and Larry Kruckenberg.
To order memorial trees or send flowers to the family in memory of Lynda Kay Huisman, please visit our flower store.