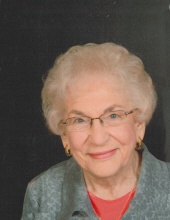 MUSIC
“Just As I Am”
Sung by King Hickman
CONGREGATIONAL HYMNS
“In The Garden”
“Amazing Grace”
“He Lives”
Organist: Barb Burns

Arrangements under the care of the
Vander Ploeg Funeral Home; Sheldon, Iowa
MARCIA H. BENSON
Marcia Helen Benson, the daughter of Clifton and Elsie (Hamann) Moore was born January 1, 1930 near Alvord, Iowa. She moved with her family to a farm near Rock Valley, Iowa and attended country school and graduated from Rock Valley High School in 1947. She worked for Northwestern Bell Telephone Company in both Rock Valley and Sheldon, Iowa for seven and a half years. On June 23, 1951, she was united in marriage to Oscar J. Benson at the Pioneer United Methodist Church in Rock Valley. In January of 1952, the couple moved to Sheldon, Iowa to make their home. The couple were blessed with two children, Rhonda and Bruce. Marcia was a stay at home mother. When her children were in high school she went to work as a secretary for the Sheldon High School, Area 4 and for seventeen years, before she retired at Farm Credit Association in Sheldon. The couple’s retirement years were spent in Sheldon and for many winters in Mesa, Arizona. Marcia passed away on Friday, December 29, 2017 at the Unity Point St. Luke’s Hospital reaching the age of 87 years, 11 months and 28 days.
She was a member of the United Methodist Church in Sheldon. She enjoyed spending time with her family, especially the family vacations. She also enjoyed playing cards, visiting with her friends, and counted cross stitching.
Marcia’s memory is cherished by her husband, Oscar of Sheldon, Iowa; children, Rhonda (Hank) Glisar of Sioux City, Iowa; Bruce (Dru) Benson of Cumming, Iowa; 4 grandchildren, Mitch (Allie) Benson; Naomi (Carlos) Laurenzano; Robert (Julie) Glisar; Stephanie Glisar; 5 great grandchildren, Luca and Enzo Laurenzano, Kelsey (Adam) Cory, Megan (Brandon) Wegher and Nathan Glisar and two great-great grandchildren, Brody and Melia; one brother, Jim (Jane) Moore of Lakewood, Colorado and one sister, Karen Easton of Marshall, Texas also other relatives and friends.
She was preceded in death by her parents, Clifton and Elsie, two sisters and their husbands, Lois (John) Collenbaugh and Mavis (Walt) Vugtereen and a brother-in-law, Gary Easton.

The Lord is my Shepherd; I shall
not want. He maketh me to lie
down in green pastures; He leadeth
me beside still waters. He
restoreth my soul; He leadeth me
in the paths of righteousness for
His name’s sake.
Yea, though I walk through the
valley of the shadow of death, I will
fear no evil; for Thou art with me;
Thy rod and Thy staff they comfort
me; Thou preparest a table before
me in the presence of mine enemies;
Thou anointest my head with oil,
my cup runneth over.
Surely goodness and mercy shall
follow me all the days of my life;
and I will dwell in the house of the
Lord forever.
To order memorial trees or send flowers to the family in memory of Marcia H. Benson, please visit our flower store.