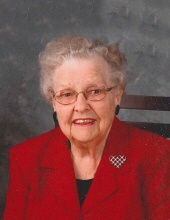 Visitation
with family present will be
from 4 - 6 P.M. on Sunday, September 23, 2018
at the Eldridge Family Funeral Home in Primghar.

CONGREGATIONAL HYMNS
“In The Garden” “The Old Rugged Cross”
“How Great Thou Art:
Organist: LaNan Eldridge

Arrangements under the care of the
Eldridge Family Funeral Home; Primghar, Iowa
Margaret Emma Katherine (Rehder) Perry, daughter of Emil and Hilda (Jurgensen) Rehder was born on December 12, 1921 at Calumet, Iowa. She was baptized and confirmed at the Evangelical Zion Church in Calumet where she was a long-time member. She received her education a Gaza school and graduated from High School in 1939. On January 17, 1943, she married Dale A. Perry in her family home. To this union were born four children. Margaret was a loving mother, homemaker and assisted with farm work and milking cows until Dale’s death in January 1970.
After moving to Primghar, she attended classes at Iowa State University in Ames to become a Certified Dietary Supervisor. Margaret was employed at Baum-Harmon Memorial Hospital from 1970 until 1981. During this time, she changed her church membership to the United Church of Primghar. Margaret enjoyed cooking and baking, bowling, playing cards, going on various trips and spending time with friends and family. Margaret would volunteer her time and baking skills for many church functions and Women’s Club. Following the death of her daughter Cindy in December of 1995 she also dedicated her time to helping raise her grandson Adam. Margaret was most happy when she was planning and cooking for family meals and holidays.
Margaret was thankful she could reside in her home as long as possible. She passed away at Prairie View Home in Sanborn at the age of 96 years, 9 months and 8 days, only having to be out of her home 39 days.
Margaret leaves to cherish her memory, son Tom and Kathy Perry of Mt Pleasant, IA; their daughter Kim and Grahm Hott and children, Sydney and Dylan of Marion, IA; son, Denny and Vicki Perry of Spirit Lake, IA; daughter, Mary and Roger Vander Pol of West Point, NE; their daughter, Krystal Niles and children, Gage, Paige and Hailey Niles and Paul Stiles of Parker, CO; her son-in-law, Vernon Ruschmann of Primghar and his son, Adam of Sheldon, IA; one sister, Ruby Miller of Paullina, IA; a brother, Curt and Betty Rehder of Primghar, IA and a sister in-law, Yvonne Rehder in Colorado also many other relatives and friends.
She was preceded in death by her husband, a daughter, Cindy Ruschmann, her parents, great grandson, Zachary Niles, a brother, Burdette Rehder, two sisters and brothers-in-law, Erma and Edward Gerstandt, Shirley and Roy Ebel and Eldon Miller.
To order memorial trees or send flowers to the family in memory of Margaret Perry, please visit our flower store.