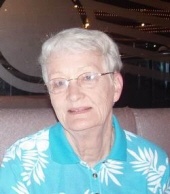 Visitation with the family present will be from 10:00am Saturday, June 4, 2016 until the time of service at the Vander Ploeg Funeral Home in Sheldon, Iowa.

After todays memorial service, relatives and friends are
invited to join the family at the Sheldon Pizza Ranch
for a time of fellowship.

Memorials may be directed to:
www.alzfdn.org/Donation-Page/donate-to-find-a-cure-for-alzheimers-disease.html


MARILYN K. CARDIN
Marilyn Kay Cardin, the daughter of Harold and Thelma (Omer) Grafton, was born on June 9, 1930 in Sanborn, Iowa. She attended school in Sanborn and graduate from Sanborn High School in 1948. She worked in the Office of Armor before she was united in marriage to James Cardin on June 6, 1949 at St. Patricks Catholic Church in Sheldon, Iowa. They made their home and raised their family in Sheldon. After Jims retirement they moved to Ashton, Iowa and wintered in Florida. They moved to the Prairie View Home in Sanborn, Iowa in 2011. Jim preceded Marilyn in death on April 7, 2015. Marilyn passed away on Tuesday, May 31, 2016 at Prairie View Home in Sanborn, reaching the age of 85 years, 11 months and 22 days.
Marilyn was a past member of St. Patricks Catholic Church in Sheldon; St. Marys Catholic Church in Ashton and currently was a member of St. Cecilias Catholic Church in Sanborn.
Marilyn is survived by her children, Mark Cardin of Truckee, California, Debra Bullock of Port Orange, Florida/Sheldon, Iowa, Dana Cardin and Ryan Kolder of Des Moines, Iowa and Thomas and his wife, Carol Cardin of Boise, Idaho; three grandchildren, Kassie and Doug Jordan and Joseph and Christian; 3 great-grandchildren, Doug Jr., Alex and Nick; two sisters, Kathy and Ted Hemmig of San Jose, California and Dorothy and Rodney Kroese of Ellsworth, Minnesota; sister-in-law, Betty Grafton of Spencer, Iowa, also other relatives and friends.
Marilyn is preceded in death by her parents; her husband, Jim; a sister, Patricia Bethel and a brother, Omer Grafton.
To order memorial trees or send flowers to the family in memory of Marilyn Kay Cardin, please visit our flower store.