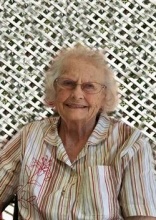 IN LOVING MEMORY OF
MARJORIE A. CARNAHAN

In lieu of flowers, memorials will be distributed by the family.

MARJORIE A. CARNAHAN
Marjorie Ann Carnahan, the daughter of Lee and Marie (Innis) Martin was born on January 24, 1932 at the Sutherland Hospital in Sutherland, Iowa. She graduated from Sutherland Consolidated Schools in 1950. On June 11, 1955, she was united in marriage to Francis Carnahan at the Methodist Church in Primghar, Iowa. To this union, the couple was blessed with five children. Marge was a lifetime resident in Sutherland, with the exception of moving with her parents during WWII, to Tacoma, Washington. Marge was the great granddaughter to James P. Martin (last surviving IowaCivil War veteran). Marge passed away on Sunday, February 19, 2017 surrounded by her family, reaching the age of 85 years and 25 days.
Marge was a member of the United Methodist Church in Sutherland. She was a Cub Scout leader, blood mobile local organization leader and a member of the Sutherland Legion Auxiliary. She enjoyed fishing, crocheting, playing cards, dancing, growing flowers and mainly spending time with her family. As a family, they spent countless hours canning vegetables from their garden. Marge enjoyed and spent many years wallpapering. She was always willing to lend a helping hand. Marge spent many days and weekends babysitting for her grandchildren, loving every minute.
Left to Cherish her memory is her husband of 61 years, Francis of Sutherland; children, Steven and wife, Terri Carnahan of Sutherland, Iowa, Larry and wife, Michele Carnahan of Bovey, Minnesota, Linda and husband, Michael Bates of Spencer, Iowa, Joanne and husband, Daniel Stamer of Paullina, Iowa and Sheryl Hunt of Granville, Iowa and friend, John Nasers; fourteen grandchildren; 13 great grandchildren; sister, Myrna and husband, Wayne Ewoldt of Roger, Arkansas; also other relatives and friends.
Marge was preceded in death by her parents and sister, Norma Behrens.

Mary Elizabeth Frye
To order memorial trees or send flowers to the family in memory of Marjorie A. Carnahan, please visit our flower store.