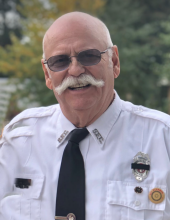 The family requests that everyone observes the social distancing guidelines
Masks are required during the visitation and the service at the church
with limited seating available for the church service.

Mark Eugene Matthes, age 66, of Sheldon, Iowa died peacefully at his home on Thursday, October 1, 2020 with his family by his side. He was excited to hang out in heaven. He was a devoted husband, father and grandpa and a pillar of the community.

He was always on call, in many ways. He served on the Sheldon Fire Company for 39 years. He answered his phone and opened his home day or night to listen to or mentor both friends and strangers. He was the perfect balance of honesty and humor.

Born on February 5, 1954, in Des Moines, Iowa to Jerry Eugene and Patricia Sue (Donahue) Matthes, he grew up in the Beaverdale Neighborhood before moving to Sheldon in 1969. Soon after moving, he met the love of his life, Barb. They were married on June 22, 1974 and spent 46 years working hard and having fun together.

Mark graduated from the Powerline Program at Northwest Iowa Technical College and had a 36 year career as a Telephone Technician before retiring from Qwest. He was always known as the “Telephone Man” and continued working on phones and communication systems long after his retirement.

Mark enjoyed spending time in the garage. He was always working on something he could ride or drive – snowmobiles, Harleys, and his dream car, a 1965 Chevelle. He enjoyed every minute with his kids and grandkids and would secretly find ways to make their big wheels, bikes, toys and mopeds faster and cooler. Mark and Barb logged thousands of miles on motorcycle across the country, sometimes with just a tent and a couple of changes of clothes.

He had a great love for music and taught himself how to play the drums. His children grew up listening to 70's rock and he loved playing with the MAC Band.

He was a long-time member of many clubs and organizations, including the Knights of Columbus and Fraternal Order of Eagles.

Mark was preceded in death by his father, Jerry Matthes. He is survived by his wife Barb (Niichel); his children Trisha (Aaron) Laake of Sioux Falls, SD, Theresa (Michael) Freeman of Shelbyville, Illinois, and William (Lori) of LaPorte City, IA; his grandchildren Nile (13) and Adeline (10), Dru (14), Jack (11) and Blake (7), and Ellie (2) and a baby granddaughter on the way; his mother Patricia (Donahue) of Sheldon and his sister Monica (Rick) Hauger of Prairie Grove, AR; and his mother-in-law Wilma Niichel of Sheldon.
In lieu of flowers, donations can be sent to St. Patrick's Church and The Sheldon Fire Company.
To order memorial trees or send flowers to the family in memory of Mark E. Matthes, please visit our flower store.