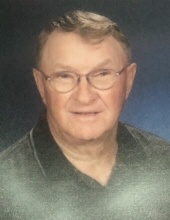 IN LOVING MEMORY OF
MARLIN A. MEHRENS

Visitation
with family present will be from 5 - 7 P.M.
on Friday, January 3, 2020
at the Eldridge Family Funeral Home in Paullina.

CONGREGATIONAL HYMNS
“Great Is Thy Faithfulness”
“How Great Thou Art”
“It Is Well With My Soul”
Pianist: Cherie Friedrichsen

Arrangements under the care of the
Eldridge Family Funeral Home; Paullina, Iowa
Marlin Allen Mehrens, the only child of Walter and Dora (Peters), was born on July 8, 1938, and was raised on his family’s farm outside of Gaza, Iowa. He attended and graduated from Gaza Consolidated School and then took over the family farm in 1956 after the death of his father. On August 12, 1972, Marlin was united in marriage to Judy Larson in Beresford, South Dakota. Marlin and Judy had three children, Jennifer, Rebecca, and Christopher. Marlin lived his entire life on his family farm.
Marlin was a member of Zion United Church of Christ in Calumet, Iowa, where he served on the church council. He also served on the Osceola Rural Water Board. Marlin’s life revolved around farming, so he did not have any hobbies. However, in his free time, he enjoyed bowling and participated in a league for 25 years, during which he bowled a 300 game. Marlin also enjoyed playing cards and games with his card club, attending his kids’ sporting events and music programs, and driving his pickup around, frequenting the Gaza Co-op and Paullina Drive-In. In addition, he liked polka music, fishing, family trips to Lake Mary, and collecting John Deere memorabilia. Later in life, when Marlin retired from farming, he enjoyed taking bus trips to locations like Branson, Missouri; chatting with neighbors who stopped to visit; sitting on the deck with his dog Molly; watching the Twins play baseball; tuning in to RFD-TV; following high school athletics; and traveling to Sioux Falls to watch his grandchildren, Chase and Ella, play football, basketball, volleyball, softball and baseball. Marlin also loved family visits to the farm, where he could spend time with his children and grandchildren, including 14-year-old Chase, 12-year-old Ella, 4-year-old Hazel, and 1-year-old Caleb.
Left to cherish Marlin’s memory are his wife, Judy; their children and their spouses: Jennifer and Andy DuBois, Rebecca and Kurt Peters, and Chris and Bekah Mehrens; their four grandchildren; and many other friends and relatives.
Marlin was preceded in death by his parents.
To order memorial trees or send flowers to the family in memory of Marlin A. Mehrens, please visit our flower store.