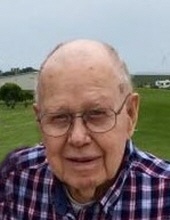 Visitation will be after 4 P.M.
on Thursday, January 25, 2018
with family present from 5 - 7 P.M.
at the Eldridge Family Funeral Home in Primghar.

MUSIC
“The Old Rugged Cross” sung by Rodd Holtkamp
CONGREGATIONAL HYMNS
“Just As I Am”
“How Great Thou Art”
Organist: Becca Moermond

Arrangements under the care of the
Eldridge Family Funeral Homes Primghar, Iowa
MARLIN C. FLICK
Marlin Clifford Flick the son of Pete and Mary (Fjeld) Flick Sr. was born June 22, 1924 on a farm two and one-half miles south of Primghar, Iowa. He attended country school through the 8th grade near Paullina, Iowa. In 1941 the Flick family moved to a farm east of Primghar. Marlin farmed with his father until taking a job at the Primghar Lumber store. On August 8, 1948, he was united in marriage to Velma Elaine Benner in Primghar, Iowa. To this union three children were born; Linda, Janet and David. They first lived by Sutherland where Marlin was a farm laborer. In 1952, they started farming in the Primghar area. After several moves they made their home three miles east of Primghar. The couple retired from farming in 1991 and bought a home in Primghar. Velma preceded him in death on July 6, 2013 in Primghar. Marlin was able to stay in his home until his passing on January 18, 2018 at the Baum-Harmon Mercy Hospital in Primghar reaching the age of 93 years, 6 months and 26 days.
He was baptized and later confirmed at Siloam Lutheran Church in Paullina and was a long-time member of the Grace Lutheran Church in Primghar. While farming he had hobbies of playing cards, playing slow pitch, and a “40-year career of bowling”. For many years Marlin served as night watchman during the O’Brien County Fair. In retirement he was able to expand his hobbies to include golf, carpentry, gardening, fishing and helping his daughter deliver flowers. Most recently he loved going to Dinner Date, puzzles and computer solitaire.
Marlin is survived by his three children, Linda Flick of Woodbury, Minnesota; Janet (Robert) Van Beek of Primghar, Iowa and David (Tina) Flick of Cumming, Georgia; grandchildren and great grandchildren, Chad Van Beek and Nancy Roskan and Tanner; Paul, Erin and Preston and Elliana Van Beek; Tim, Nicole Van Beek and Brexton and Courtney, Carson and Ryan Flick; a sister-in-law, Verlene Flick of Hartley, Iowa and a brother-in-law, Bert DeRidder Sr. of Primghar, Iowa; also other relatives and many friends.
He was preceded in death by his wife, parents, a sister, Kay DeRidder and a brother, Pete Flick Jr.
To order memorial trees or send flowers to the family in memory of Marlin Flick, please visit our flower store.