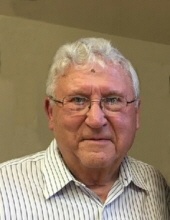 IN LOVING MEMORY OF
MARLO A. EBEL

MUSIC
“The Lord’s Prayer”
Sung by: David Fintel
CONGREGATIONAL HYMNS
“In The Garden”
“Have Thine Own Way”
“Just A Closer Walk With Thee”
Organist: Verla Hibbing

Arrangements are under the care of the
Eldridge Family Funeral Home; Paullina, Iowa.
Marlo A. Ebel
Marlo Albert Ebel, the son of Albert and Lucile (Straub) Ebel was born on a farm west of Paullina on November 27, 1935. He was baptized on December 22, 1935 and confirmed on June 5, 1949 at Zion Lutheran Church. He attended Zion Lutheran School through the 8th grade and graduated from Paullina High School in 1953. He began working for the Paullina Times in 1951 and spent 29 ½ years there. On Easter Sunday, April 21, 1957, he was united in marriage to Barbara Oeffner at Zion Lutheran Church in Paullina. To this union two children were born, Mike and Paula. Marlo and Barb purchased the Lundell Department Store and operated Ebel’s Department Store until 1998. He started working for Peter Eldridge at the Eldridge Family Funeral Home in 1998 until present. Marlo was also the Paullina Mayor for six years. Later he combined Paullina Liquor and Dry Cleaning and operated them until the fire destroyed his buildings. Marlo passed away on Sunday, June 17, 2018 at Sanford USD Medical Center reaching the age of 82 years, 6 months and 20 days.
Marlo was a lifetime member of Zion Lutheran Church where he served as elder. He had a passion for baseball watching and playing and where he wound up with the name puddin’ head. He was a charter member of the Paullina Jaycees and won the blue chip award. He joined Paullina Fire Department in 1970 and was still a member. He joined the Paullina Ambulance Team in 1972 until 2016 (44 1/2 years both were records). He was a past president of the Paullina Chamber of Commerce and served on the Paullina City Council for 25 years. Family and helping others in need were a very important part of his life. He also enjoyed visiting and writing about the campers and visitors at Paullina Lake and remembering those in the nursing homes and their birthdays.
Left to cherish Marlo’s memory is his wife of 61 years, Barb of Paullina; two children and their spouses, Mike and Kristin Ebel of Ireton, Iowa and Paula and Scott Kommes of LeMars, Iowa; five grandchildren, Grant and Rachel Ebel, Ashlee and Jordan Richardson, Drew and Kelsi Ebel, Erin Kommes and Marc Kommes; first great grandchild on the way; sister-in-law, Joan Oeffner; also nieces, nephews other relatives and many friends.
Marlo was preceded in death by his parents and two sisters, Verlie and Howard Kluender and Lovella and Marcellus (Mose) Rader and two brothers-in-law, Frederick and Lawrence Oeffner.

God looked around His garden
and He found an empty place.
He then looked down upon this
earth, and saw your tired face.
He put his arms around you
and lifted you to rest.
God’s garden must be beautiful,
He always takes the best.
He knew that you were suffering,
He knew that you were in pain.
He knew that you would never
get well on earth again.
He saw the road was getting rough
and the hills were hard to climb.
So He closed your weary eyelids,
and whispered, “Peace be thine.”
It broke our hearts to lose you
but you didn’t go alone,
for part of us went with you
the day God called you home.
To order memorial trees or send flowers to the family in memory of Marlo A Ebel, please visit our flower store.