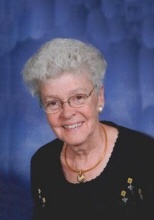 Visitation with the family present will be
from 4:00 7:00pm Sunday, January 8, 2017
at the Vander Ploeg Funeral Home in Sheldon, Iowa.

Memorials may be directed to: Bethel Reformed Church,
Beecin Foundation or the Northwest Iowa Health Center

Martha Louise Zoutendam was born in Hedrick, IA, to Charles Charlie and Grace (Curtis) Hanson, on October 29, 1932. She grew up on a farm near Hedrick and attended elementary and high school there. After HS graduation in 1950, she attended Central College in Pella, IA, where she graduated with a Bachelor of Arts degree in teaching in 1954. As a freshman at Central, she met Ronald Zoutendam, her husband (to be). They were married between their junior and senior year on August 31, 1953. They were the first married couple to live together on campus. They both graduated from Central and moved to Iowa City, IA, where Ron attended medical school. Martha taught 2nd grade for two and half years (until she was pregnant with her first child). After her husband graduated with his MD, they lived in Des Moines, IA, for one year, while he completed his residency at Broad Lawns Hospital. Then they and their two young children, Mark and Ronda, settled in Sheldon, IA, where Ron practiced medicine for 45 years. The couple had five children, of whom two are deceased. Martha was proud and happy to be a full-time mother and small-town physicians wife and filled those roles admirably. She was devoted to her familysupporting her five children in their various activities. She was known for her cooking, her kindness, gentleness, and hospitality. Her spirit of giving often prompted her to give gifts to all who visited her. She also lived her faith and prayed nightly for her children, grandchildren, and friends, without fail. Martha passed away at her home in Sheldon on Wednesday, January 4, 2017 at the age of 84, surrounded by loved ones.

She was active in the Bethel Reformed Church in Sheldon, where she sang in the choir, taught catechism, and was an active participant in various ladies groups, including the guild and circles. She also cherished her Bible study groups, and her friends within them cherished her. In recent years, she very much enjoyed volunteering at the Village Treasure Chest, where she frequently found treasures herself. Visits from her grandchildren and friends were a highlight of her life. She loved children with her entire being and always strived to set a godly example for them. Family trips were also highlights of her life, including the family motorhome trip in 1973 through Europe. After their children were grown, Martha and Ron frequently enjoyed traveling all over the United States and overseas. In their travels, they visited all the continents (except Antarctica). They enjoyed traveling together via motorhome (including Australia and New Zealand), train, cruise ships, river cruises, and group tours. After a number of years of winter traveling (including three winters in Bahrain for Christian mission service), Ron and Martha spent seven years in Lake Havasu City, AZ.

A wife of noble character who can find?
She is worth far more than rubies.
Her husband has full confidence in her
and lacks nothing of value.
She brings him good, not harm,
all the days of her life.
She opens her arms to the poor
and extends her hands to the needy.
She is clothed with strength and dignity;
she can laugh at the days to come.
She speaks with wisdom,
and faithful instruction is on her tongue.
She watches over the affairs of her household
and does not eat the bread of idleness.
Her children arise and call her blessed;
her husband also, and he praises her:
"Many women do noble things,
but you surpass them all.
Charm is deceptive, and beauty is fleeting;
but a woman who fears the Lord is to be praised.

Proverbs 31 vs10-12, 20, 25-30
To order memorial trees or send flowers to the family in memory of Martha L Zoutendam, please visit our flower store.