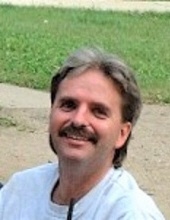 Services for Martin "Pete" Krekow, age 61, of Cherokee, Iowa formerly of Sutherland, Iowa who passed away on Wednesday, December 5, 2018 at Cherokee Specialty Care in Cherokee. A graveside service at Waterman Cemetery in Sutherland will be held at a later date.
Arrangements are under the care of the Eldridge Family Funeral Home in Paullina.

Martin Carl Reinhart (Pete) Krekow II came into this world on February 1, 1957, in Hartley, Iowa. His parents were Martin Carl Reinhardt Krekow and Lillian Francis Krekow. In doing so, Pete joined a sister and a brother.
Pete was raised in the Sutherland, Iowa, community, where he attended both elementary and secondary schools in the Sutherland Community Schools. During those years, his love of sports, hunting, and especially basketball, kept him involved. He graduated from Sutherland High School in 1975.
One of Pete’s hobbies was his love of cars, which eventually led him to future employment, in a beginning career in auto parts in the Sioux City area. Having always loved the Iowa Great Lakes, Pete moved to the area and worked for a period of time at Ray’s Auto Parts in Spirit Lake, Iowa. The opportunity arose for Pete to get into a business of his own, which he did, and became part owner of “The Windjammer”, a nightclub in Arnolds Park, Iowa.
During this period of time, fate took a strange turn, when he was diagnosed with Multiple Sclerosis. The disease was very demanding, taking over his physical abilities, and causing him to drastically change his lifestyle.
Pete spent several years living with his mother, Lillian, in Sutherland. As Lillian’s health declined with age, Pete moved into a nursing home in Cherokee, Iowa, where he remained until his passing.
Preceding him in death were both of his parents and a younger brother, Roger.
Left to cherish his memory are his three children, Brittany and Cash, of Estherville, Iowa; Aimee (Nathan) Mueller of Archer, Iowa; his sister, Jean (Randy) Unrau of Paullina, Iowa; and his brother, Bill (Bobbi) Maas of Orleans, Iowa.
No service is planned for the immediate future, but a family and friends’ memorial service will be held at a later date.
To order memorial trees or send flowers to the family in memory of Martin "Pete" Krekow, please visit our flower store.