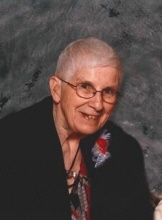 Visitation will be after 3:00pm on Tuesday, March 14, 2017
at the Vander Ploeg Funeral Home in Sheldon
with family present will be from 5 7 P.M.
A Christian Wake Service will be at 7:00 pm
and a Parish Rosary will be at 7:30pm

Memorials may be directed to
Sanford Sheldon Home, Health and Hospice and
or to St. Patrick Catholic School

After the graveside service, relatives and friends are invited
to join the family in the fellowship hall of the church for dinner

Mary Ann Susan Williams, daughter of John and Mary Schnider was born March 6, 1927 in Sheldon, Iowa. In 1947, after graduation from Sheldon High School, she worked at Swansons grocery store. She met Mark in 1948, when he was in Sheldon painting the towns water tower. They remained in touch and when Mark returned from Korea in 1951 they were married in Sheldon. They moved to Waterloo, Iowa for a brief period before returning to Sheldon. Mary and Mark had four children and Mary took care of the house for several years before working at Gibsons and Lawsons Hardware. She lived in Sheldon for the remainder of her life with her husband and children all living close by. She passed away on Saturday, March 11, 2017 at Sanford Senior Care in Sheldon surrounded by family. She was 90 years and 5 days old.
Mary loved to bake and is best known for her banana bread. Some even knew her as roll Grandma. She would sit down at the kitchen table and visit for hours with friends, family and neighbors. She had a very caring heart for others, especially those who had no one else to call family, and was even crowned queen of the Senior Care in 2015. There was nothing that gave her more joy than being active in her grandchildrens lives and cuddling with her great-grandchildren when they visited. Mary enjoyed working craft shows with Mark selling his woodwork. She spent many years volunteering at St. Patricks School and the Village Treasure Chest and was an active member of St. Patricks church.
Mary and Mark celebrated their 65th wedding anniversary on October 29, 2016. She will be remembered for her kind, selfless heart and endless devotion to her family.
Survivors include her husband, Mark; her son, Joe and his wife, Sue Williams of Sheldon, Iowa; son, Mike and wife, Donna Williams of Spirit Lake, Iowa; daughter, Deb and her husband, Gary Glass of Sheldon, Iowa; son, Pat and his wife, Penny Williams of Sheldon, Iowa; eight grandchildren and many great and great-great grandchildren as well as family and friends.
She was preceded in death by her four brothers, John, Frank, Bill and Hank and her parents.

God looked around His garden,
And he found an empty place.
He then looked down upon this earth,
And he saw your tired face.
He put his arms around you,
And lifted you to rest.
Gods garden must be beautiful,
He only takes the best.
He knew that you were suffering
He knew that you were in pain
He knew that you would never
Get well on earth again.
He saw the road was getting rough.
And the hills were hard to climb.
So He closed your weary eyelids,
And whispered, "Peace be thine".
It broke our hearts to lose you,
But you did not go alone;
For part of us went with you,
The day God called you home.
To order memorial trees or send flowers to the family in memory of Mary Ann S. Williams, please visit our flower store.