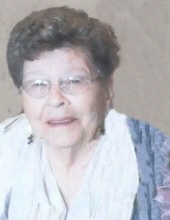 VISITATION
with family present will be from 1 2 P.M.
on Sunday, August 20, 2017
at the Eldridge Family Funeral Home in Primghar

CONGREGATIONAL HYMNS
Amazing Grace
What a Friend We Have in Jesus
Just a Closer Walk With Thee
Organist: LaNan Eldridge

FINAL RESTING PLACE
Pleasant Hill Cemetery
Primghar, Iowa
After the graveside service relatives and friends are invited
to join the family in the fellowship hall of the church.

Mary Marie Bonath, the daughter of Albert and Eileen (Bennett) Blow was born March 27, 1930 in Yankton, South Dakota. She received her education in Yankton. She left Yankton and moved to Wisconsin where she worked at a car clock company for several years. She returned to Yankton and was employed as a telephone operator for Yankton State Mental Institution. It was at that time she met Bob Bonath while he was attending Yankton College. The couple were married in 1953. They resided in Nebraska, Illinois and Wisconsin before moving to Iowa. The couple moved to Primghar in 1976, where Mary worked in the school cafeteria for several years. After retiring she enjoyed needlework and assisting Bob in their many crafts and remodeling projects. In 2014, they moved to the Manor at Prairie View Campus in Sanborn, Iowa. Mary passed away on Wednesday, August 16, 2017 at her home in Sanborn reaching the age of 87 years, 4 months and 19 days.
She was a member of the United Church of Primghar. Her family was very important to Mary her children, grandchildren and great grandchildren.
Mary is survived by her children, Dee (Tom) Ream of West Bend, Wisconsin; Steve (LaNora) Bonath of Garland, Texas; Dennis (Stephanie) Bonath of West Des Moines, Iowa; Lynn Nickelson and Karen (Rick) Ginger of Primghar, Iowa; five grandchildren, Stephanie (Ryan) Crass, Alison Propson and Bradley Rusch, Neal (Kari) Ginger, Kelli (Martin) Lambertus, Justin Bonath; five great grandchildren, a sister-in-law, Irene Painter of Sanborn, Iowa; other relatives and many friends.
She was preceded in death by her husband Bob on March 16, 2017, parents, all her brothers and sisters and a son-in-law Malcom Nick Nickelson.
To order memorial trees or send flowers to the family in memory of Mary M. Bonath, please visit our flower store.