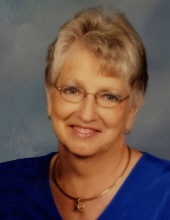 Mavis D. Weaver, age 76, of rural Paullina, Iowa who passed away on Wednesday, April 1, 2020 at Heartland Care Center in Marcus, Iowa. Her Memorial Service will be at 2:00 P.M. on Sunday, July 11, 2021 at the Oakdale Evangelical Free Church in rural Meriden, Iowa with Pastor Jonathan Caldwell ~ officiating.

The Weaver family appreciates your love and support during this time. Online condolences are encouraged at www.eldridgefamilyfuneralhomes.com

Mavis Dianne Weaver the daughter of Conrad and Marie (Meyer) Limberg was born December 9, 1943 on a farm near Woden, Iowa. She attended country school and graduated from Woden-Crystal Lake High School in Crystal Lake, Iowa. She attended Dordt College in Sioux Center, Iowa and finished her education at the Lutheran School of Nursing in Sioux City, Iowa with a R.N. degree. On August 20, 1965 she was united in marriage to Burdette Weaver at the Woden Christian Reformed Church in Woden, Iowa. After their marriage the couple lived on farms near Larrabee, & Paullina. Mavis lived in Sioux City, South Sioux City, Nebraska. She was employed at various nursing homes and hospitals during her career and before her retirement, Home Health and Hospice. Even when ill health forced her to slow down, she was chairmen of the BEECIN Board for Home Health and Hospice for many years. Mavis passed away on Wednesday April 1, 2020 at the Heartland Care Center in Marcus, Iowa reaching the age of 76 years, three months and twenty-two days.
Mavis attended the Oakdale Evangelical Free Church in rural Meriden for many years. She was a very loving and caring person who loved the Lord and Savior very much. She was so willing to do things for other people. Her grandchildren and their activities had a very special place in her heart; being with family was very important to Mavis.
She is survived by her husband of over 54 years Burdette Weaver of rural Paullina, Iowa; one daughter Julie (Brad) Wielenga of Orange City, Iowa; two sons Rick Weaver of Paullina, Iowa and Ryan (Michelle) Weaver of Larrabee, Iowa; grandchildren Samantha (Preston) Hoebelheinrich of Orange City, Iowa; Tamra (Justin) Van Kalsbeek of Sheldon, Iowa, Randi Wielenga (Jaaron Paugh) of Vermillion, South Dakota; London Wielenga of Sheldon, Iowa; Jessica (Zach) Henninger of Omaha, Nebraska and Bryce Weaver of Larrabee, Iowa; one sister Doris Leuwerke of Britt, Iowa; one brother and sister-in-law Arthur (Nancy) Limberg of Decorah, Iowa also many very special nieces, nephews and friends.
She was preceded in death by her grandparents, parents two brothers and their wives Kenneth (Bev) Limberg and Don (Mavis) Limberg and a brother-in-law Pete Leuwerke.
To order memorial trees or send flowers to the family in memory of Mavis D. Weaver, please visit our flower store.