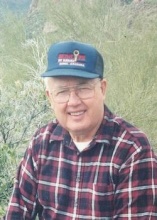 CONGREATIONAL HYMNS
Just A Closer Walk With Thee
I Was There To Hear Your Borning Cry
The Old Rugged Cross
Organist: Carleen Kehrberg

After the graveside service, relatives and friends are
invited to join the family in the fellowship hall of
St. Paul Lutheran Church in Sheldon

MERLYNN O. CALLENIUS
Merlynn O. Callenius, the son of Merlynn Otto Sr. and Dove Marie (Hoy) Callenius was born on August 24, 1928 in Sheldon, Iowa, he grew-up on a farm near Hospers where he attended school and graduated from Hospers High School in 1946. Merlynn served in the United States Army from 1951 until 1953 during the Korean Conflict. He started farming in 1953 on his return from the service. Merlynn was united in marriage to Adalene Clara Hohbach on February 21, 1954 in St. John Lutheran Church in Germantown, Iowa. The young couple farmed near Hospers for a year before moving to a farm near Archer, Iowa. In 1965, they moved to the family farm near Hospers. Merlynn retired from farming after 40 plus years, and moved to Sheldon in 1993. Merlynn passed away on May 15, 2017 at the Sheldon Sanford Senior Care, reaching the age of 88 years, 8 months and 21 days.
Merlynn was a member of St. Paul Lutheran Church in Sheldon, the Sheldon Prairie Queen Kiwanis, the Hospers Reuter Post of the American Legion. He loved farming, and enjoyed flying (he was a pilot and had owned a plane). He enjoyed playing cards, spending time with his family, grandchildren and great-grandchildren, having coffee with his friends and wintering in Arizona for the past 23 years.
Left to cherish Merlynnsmemory is his wife of 63 years, Adalene of Sheldon; a son, Robert and Cindy Callenius of Hospers, Iowa and a daughter, Marcia Even of Overland Park, Kansas; 6 grandchildren, Brandon (Alison) Callenius, Mark (Ashley) Callenius, Jason Callenius, Jonathan Even, Christopher (Aubrey) Even, Molly Even; 6 great-grandchildren, Charlotte, Caleb, Mason and Hunter Callenius, Alaina Shrewsbury-Even and Calvin Even; 5 brothers and sisters, Jackie Wersinger of Sheldon; Ronald Callenius of Farmington, New Mexico; Kenneth Callenius of Omaha, Nebraska; Karen Jungers of Aiken, South Carolina, Wallace Callenius of Shakopee, Minnesota; and other relatives and friends.
Merlynn was preceded in death by his parents, a son, Stanley Callenius; a great-granddaughter, Lily Anne Callenius; 2 sisters, JoAnne Koester and Nancy Meendering and a brother, Alvin Callenius.