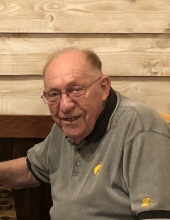 The Service will be Live Streamed on St. Paul Lutheran Church of Sheldon Web Page

MERWIN JACK McCARTHY
Merwin Jack McCarthy the son of Lloyd and Louise (Grewe) McCarthy was born August 28, 1932 in Melvin, Iowa. He moved with his parents to Sheldon, Iowa where he received his education. On July 16, 1951 he was united in marriage to Evelyn Huck at the St. Paul Lutheran Church in Sheldon. After their marriage Jack enlisted in the United States Air Force on November 2, 1952 and serving his country until being discharged on May 31, 1973. He reached the rank of Master Sgt. and had served a tour in the Vietnam War. During Jack’s service the couple lived in various cities where they started their family. After his discharge, the couple settled in Sioux City where Jack was employed in the Computer Department of the Security National Bank and the Toy National Bank. The couple returned to make their home in Sheldon and Jack worked at Don’s Sheet Metal, Joyce’s Food Store and before his retirement was a driver for Rides. He passed away at his home in Sheldon on Monday February 8, 2021 reaching the age of 88 years 5 months and 10 days.
He was a member of the St. Paul Lutheran Church in Sheldon and FOE #297 Eagles Club of Sheldon.
Jack leaves to cherish his wife of over 69 years, Evelyn McCarthy of Sheldon, Iowa; children Terry and his wife, Debra McCarthy of Council Bluffs, Iowa; Cindy and her husband, Bob Bobier of South Sioux City, Nebraska; and Wayne and his wife, Diane McCarthy of Goodyear, Arizona; and Leon Hulstein of Melvin, Iowa; also 6 grandchildren, 7 great grandchildren and also many other relatives and friends.
He was preceded in death by his parents, Lloyd and Louise McCarthy, brothers, Lloyd Jr. and David McCarthy, sisters, Audrey Schnieder, Gilda DeWaay, Shirley VerHoef and Marilyn Botello.
To order memorial trees or send flowers to the family in memory of Merwin Jack McCarthy, please visit our flower store.