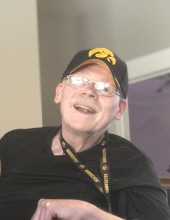 Arrangements are under the care of the Andringa Funeral Home - Sheldon.
Online condolences may be made to the Family at www.vanderploegfunerals.com

Arrangements are under the care of the
Andringa Funeral Home; Sheldon, Iowa.
Michael J. Andringa, the son of Don and Margene Frances (Midge) Andringa was born on April 20, 1955, Sheldon, Iowa. Mike remained at home with his parents until 2014 at which time he moved into a waiver home as part of Village Northwest Unlimited, Sheldon, Iowa and later moved on campus.
Mike passed away on Tuesday, October 27, 2020 at the Sanford Sheldon Medical Center in Sheldon, reaching the age of 65 years, 6 months and 7 days.
Mike was a member of the First Reformed Church in Sheldon. He loved singing and was a member of the Village Northwest Unlimited Choir for 35 years. He was one of the oldest living members of VNU, having been there since 1974. Mike loved his Village Family and all of the fun and special times they had together. While living at home, Mike enjoyed listening to his scanner and his CB, especially during hunting season to keep in contact with his family and hear what they were up to. He loved good food, family get-togethers, the Minnesota Vikings and the Iowa Hawkeyes. He had a great sense of humor and a very happy outlook on life. He was a joy to be around and a blessing to those lucky enough to know him.
Left to cherish Mike’s memory are his brother, Greg Andringa and his wife, Janet of Sheldon, IA; his niece, Samantha Haupert and her husband, Doug of Sheldon, Iowa; his nephew, Judd Lee Andringa of Sheldon, Iowa; great niece, Addison, great nephews, Chase and Dax and many other relatives and friends.
Mike was preceded in death by his parents, Don on October 6, 2014 and Midge on May 1, 2019.
To order memorial trees or send flowers to the family in memory of Michael J. Andringa, please visit our flower store.