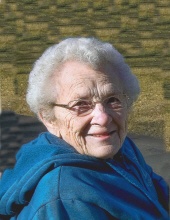 
Mildred “Millie” J. Zenk
Mildred “Millie” Zenk, Prairie View Nursing Home, Sanborn, Iowa and formerly of Boyden, Iowa, went to be with her loving Lord and Savior on Thursday, November 12, 2020 at the age of 99.
Mildred Julia Zenk was born on November 7, 1921 on the Dickmann family farm northeast of Hull, Iowa to Charles and Anna (Fick) Dickmann. She attended Wheeler #9 Country School near her farm home until the 8th grade and later graduated from the George High School. Millie was the last surviving member of the class of 1939. She was also the last of the older Dickmann generation consisting of herself and her four brothers and their spouses, Alfred & Elsie, Bob & Mildred, Ted & Frances and Clarence & Skipper.
Millie attended St. Paul Lutheran Church near Hull with her parents when she was young and was baptized and confirmed there. Later she met her husband, William “Bill” Zenk there and after he returned from World War II, they married on September 6, 1945. They were together for nearly 71 years. Bill passed away on July 10, 2016.
Millie & Bill farmed northwest of Hull for 36 years, providing a wonderful farm life for their two children, Leslie and Gayle. On Thanksgiving Day, 1981, they retired and moved to their home in Boyden, where they lived for 34+ good years. They became members of St. John’s Lutheran Church and later attended the Presbyterian Church in town. Millie loved “looking after” the neighbors… and they were very good to Millie and Bill. After Bill passed away, Millie moved to the Christian Retirement Home in Sheldon, Iowa, where she loved living for three years and made many new, good friends. Needing more care, she moved to Fieldcrest in Sheldon, Iowa in 2019 and in the summer of 2020, after suffering a stroke, she moved to Prairie View Nursing Home in Sanborn, where she passed away.
During her life of nearly 100 years, Millie enjoyed so many things-fishing, bowling, biking, mopedding, baking, cooking (she was a great cook), quilting, making dozens of fleece blankets for everyone, shopping, going to the Spencer Fair, Monday outings with Gayle, coffee at Pomegranate Market in Sioux Falls…But most of all Millie loved the many years she played softball on the Boyden team and was so proud to have Les as her coach. She also was a dedicated caregiver always ready to help out her family and those she served as a nurse’s aid.
Millie loved her family deeply and leaves behind her son, Leslie and his wife, Connie Zenk of Vinton, IA, and a daughter, Gayle Ten Haken of Boyden, IA; 4 grandchildren, Betsey (Ramsey) Nuseibeh; Bill (Melissa) Zenk; Anna (Brandon) Marcotte; Jane Ten Haken; along with 7 great grandchildren, and 1 sister-in-law, Shirley Zenk of Denison, IA, as well as many dear nieces, nephews and friends.
Millie is preceded in death by her husband, Bill; her parents, and 4 brothers, Alfred, Theodore, Robert and Clarence Dickmann.
To order memorial trees or send flowers to the family in memory of Mildred "Millie" J. Zenk, please visit our flower store.