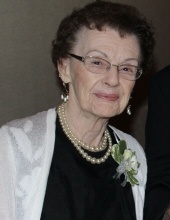 Muriel Kooiker
Sioux Falls, South Dakota
Muriel Kooiker, age 92, of Sioux Falls, South Dakota and formerly of Sheldon, Iowa who passed away on Tuesday, October 13, 2020 in Sioux Falls. A private family service was held at 2 P.M. on Friday, October 16, 2020 at the Vander Ploeg Funeral Home in Sheldon.
Burial was held at Sheridan Township Cemetery in Boyden, Iowa.
Muriel June Kooiker, daughter of Coba (Van’t Hul) Van Rennes-Vande Garde and John Van Rennes, passed from this life Tuesday, October 13, 2020 at Ava’s House in Sioux Falls South Dakota.
The first of Coba’s five children, Muriel was born June 8, 1928 in Sioux Center, Iowa, just as the noon whistle blew. Muriel’s early years in Hull, Iowa, spent close to her mother and is where she learned to speak and write fluent Dutch at her beloved grandfather Drie’s Van’t Hul’s knee.
Muriel’s father, John died when she was five. The great depression was an especially difficult time as her widowed mother had to find work. When Muriel was eight years old she moved to Trent, South Dakota and lived for a time with her dear cousin Verna Van’t Hul’s family. Farm life offered her many adventures and the opportunity to roller-skate to country school.
Muriel’s teenage years were filled with work on her mother and stepfather Abe Vande Garde’s farm near Boyden, Iowa. She helped with housework and cared for her first two sisters, Gladys and Elaine. She worked hard outside, putting up hay and milking cows. When she was sixteen, Muriel joined the Civil Air Patrol and was trained as a plane spotter. The following year, she landed one of the best paying jobs around. The Sheldon Telephone office paid her five dollars per week as a switchboard operator. By now, seventeen year old Muriel moved on to Sheldon, Iowa, and lived with her beloved Aunt Nell (Van Rennes) and Uncle Ted De Hoogh.
In 1946 Muriel met the love of her life, Vernon, shortly after he was discharged from the WWII Naval Tour. Muriel and Vern were united in marriage on November 20, 1947 in Boyden, Iowa. This was the beginning of a life filled with teamwork, devotion to each other, dedication to their children and fulfilling their dreams. In 1959, ‘Speedway Turkey Ranch’ was established. Working side by side with her husband, Muriel was an integral part of the successful family operation. Muriel also worked alongside the men on the farm, and then, prepared meals for the crews. She also kept the books, filled the fruit cellar, raised three children and maintained a huge garden. She took all those duties very seriously as a ‘Farm Wife’; An honorable title.
When Muriel and Vern retired in 2003, they moved to Sioux Falls, South Dakota.
A woman of substance and a patriot, Muriel served as President of the VFW Auxiliary for forty-one years. With the heart of a servant and a desire to honor the fallen veterans, Muriel was instrumental in the Avenue Of Flags at the Sheldon Park. Additionally, during the Vietnam era, she focused on the humane treatment and the release of American POWs and MIAs. In 1971, Muriel was selected to join an eleven member Iowa delegation to Paris. The delegation hand delivered more than 100,000 letters to, and met with, the Communist emissary Nguyen Xuan Lieu at the North Viet Nam Embassy, asking that our servicemen receive humane treatment. After Paris, Muriel met with the International Red Cross in Stockholm. Truly, Muriel was instrumental in bringing about better treatment and outcomes for our military heroes.
A positive attitude was Muriel’s ‘secret’ for a long and happy life. She was not afraid to work hard, always busy and setting goals. All of this was balanced with as much fun and laughter as she could find. She loved a good joke, was quick on the comeback line and laughed until she fell over. Muriel, a nurturer of plants, animals, family, her two grandchildren and so many friends. Fiercely loyal and ‘all in’ when anyone needed help. She loved Jesus and lived her faith.
Muriel was a jitterbug dancer, a bowler (rolled a 266 game), a golfer (with a hole in one in 1988), a piano player, and a Harley Rider (at 92 years old she still had a current motorcycle license). As a legendary pie baker and chocolate covered cherry maker, everyone in her inner circle, including neighbors, enjoyed a seemingly endless supply of her delicious treats!
Especially grateful and blessed for being a part of Muriel’s life are her children: Bradley, Douglas, Susan and husband Bob Nelimark, grandson Robert Strozdas, his Fiancé Dallas Schmidt, her daughter Eliza and the first Great Grand Baby due next January, along with Muriel’s siblings: Gladys and her late husband Harvey Moret of Sheldon Iowa, Elaine and husband Gary Green of Milford Iowa, Sheryl Vande Garde of Colorado Springs Co., Duane Vande Garde and wife Vicki of Sibley, Iowa and a host of other relatives and friends.
Muriel was preceded in death by her loving husband Vernon in 2014, her dear mother Coba in 1998, her beloved grand daughter Melissa Strozdas in 2002, son-in-law Rodney Strozdas and daughters-in-law Carolyn Kooiker and Linda Kooiker.
To order memorial trees or send flowers to the family in memory of Muriel J. Kooiker, please visit our flower store.