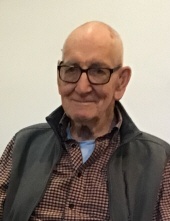 In Lieu of flowers the family would like memorials to be directed to the:
Parkinson Research Foundation


The family requests that everyone observes the social distancing guidelines during the visitation and the service at the church.

The Service will be live-streamed on First Christian Reformed Church website:
www.atfirst.org


Arrangements are under the care of the Vander Ploeg Funeral Home in Sheldon.
Online condolences may be sent to www.vanderploegfunerals.com

IN LOVING MEMORY OF
MYRON “MIKE” B. KLEINWOLTERINK

MUSIC
“Amazing Grace, My Chains are Gone”
Sung by: Clark Moret
CONGREGATIONAL HYMNS
“Peace Like a River”
“Just As I Am”
“Battle Hymn of the Republic”
“Victory In Jesus”
Pianist ~ Lora Petitt

With Military rights presented by:
McGothlen-Cowie Post #145 of the American Legion

In Lieu of flowers the family would like memorials to be directed to the: Parkinson Research Foundation

Arrangements are under the care of the
Vander Ploeg Funeral Home; Sheldon, Iowa.
MYRON “MIKE” B. KLEINWOLTERINK
Myron “Mike” Bastiaan Kleinwolterink, the son of Henry and Marie (Lems) Kleinwolterink was born on June 19, 1935 Southwest of Sheldon on a farm. He attended a country school until the 8th grade near Sheldon and graduated from Western Christian High School in Hull, Iowa in 1953. After high School he enlisted with the United States Army serving as a cook. On June 14, 1955, Mike was united in marriage to Marilyn Moret in Boyden, Iowa. After his discharge from the service they made their home on a farm near Sheldon. He enjoyed farming and working the land. Mike semi-retired from farming in 2007, but continued to help his sons on the farm. Mike also worked at Stand Aid in Sheldon from July of 1995 until 2017 after retiring from milking. In 2017, they moved into the Christian Retirement Home in Sheldon. Mike passed away at the Sanford Sheldon Senior Care in Sheldon on July 4, 2020 reaching the age of 85 years and 16 days.
Mike was an active member at First Christian Reformed Church in Sheldon and served as a deacon of the church. He had served on the Financial Board for Sheldon Christian School; the Western Christian School Board; the Sheldon Co-op Elevator Board. In his retirement they enjoyed their many trips, especially the Alaskan trip. He loved farming and working the land, the 4th of July, spending time with his family and grandchildren. He always had a toothpick with him.
Left to cherish his memory are his wife of 65 years, Marilyn; four children, Steve (Ranae) Kleinwolterink of Boyden, Iowa; Mark (Ruth) Kleinwolterink of Sheldon, Iowa; Maureen Veldman of Hull, Iowa and Jay (Sharla) Kleinwolterink of Hospers, Iowa; eleven grandchildren, nineteen great-grandchildren, a sister, Lorna Reinders of Orange City, Iowa and a sister-in-law, Norma Kleinwolterink of Sheldon, Iowa; also nieces, nephews, other relatives and friends.
Mike was preceded in death by his parents; a son-in-law, Randy Veldman and a granddaughter, Erin Veldman; a brother in infancy and two brothers, Edwin and his wife, Clem Kleinwolterink and Henry Kleinwolterink; and a brother-in-law, Bernie Reinders.
To order memorial trees or send flowers to the family in memory of Myron "Mike" Bastiaan Kleinwolterink, please visit our flower store.