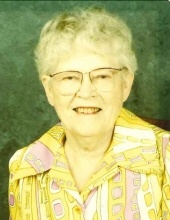 Nora “Bea” Powers
Primghar, Iowa
Services for Nora “Bea” Powers, age 99, of Primghar who passed away on Thursday, December 10, 2020 at Community Memorial Health in Hartley. A private family service will be held on Saturday, December 12, 2020 at the United Church of Primghar with Pastor Mike Cooper ~ officiating.
Burial will be at Pleasant Hill Cemetery in Primghar.
There will be no visitation.
The service will be live-streamed on the United Church of Primghar's Facebook Page at 2 PM
https://www.facebook.com/United-Church-of-Primghar-113253185380721
Arrangements are under the care of the Eldridge Family Funeral Home in Primghar.

NORA “BEA” POWERS
Nora Beatrice Powers, the daughter of Lewis and Isabel (Wright) Stanley was born on November 2, 1921 in Monona County, Iowa. She attended school in Oto, Larrabee, Rowena and Primghar. She received her high school GED at Northern Iowa Tech School in Sheldon in 1967. She married Francis Melverne Powers Jr. on November 26, 1941, at the Methodist parsonage in Primghar. Bea worked for Dr.’s Getty and Smith for 16 years as a medical assistant. After years of farming, the couple moved to Primghar in 1979. Melverne preceded Bea in death on January 8, 1995. Bea remained at home until entering Community Memorial Health in November of 2020. She passed there on Thursday, December 10, 2020 reaching the age of 99 years, 1 month and 8 days.
Bea was an active member of the United Church of Primghar. She was a member of the women’s circle, taught Sunday school, served on the missions and history committee. She was also a historian for O’Brien County, served with the women’s club of the Omega and Center townships. Her hobbies included knitting, crocheting, sewing, gardening, and lawn chair weaving. She showed many projects at the fair, receiving many ribbons. She also collected bottles, spoons, shells, and rocks. She enjoyed reading, family tree research and jigsaw puzzles.
Left to cherish her memory are her children, Susan and her husband, Charles Missman of Sheldon, Iowa, Frank Powers of Royal, Iowa, Dr. Richard and his wife Marlene Powers of Medicine Hat, Alberta, Canada, and Dennis and his wife, Daina Powers of Peterson, Iowa; 11 grandchildren and several great and great-great grandchildren. Also left to cherish her memory is her sister, Ethel DeWald of Watertown, South Dakota, and many nieces and nephews.
Bea is preceded in death by her parents, husband, F. Melverne Powers Jr., two brothers and three sisters.
To order memorial trees or send flowers to the family in memory of Nora "Bea" Powers, please visit our flower store.