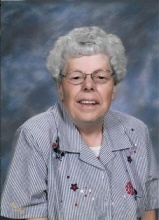 Visitation with family present will be one hour prior to service
at the Zion United Church of Christ in Calumet, Iowa.

Arrangements are under the care of
the Eldridge Family Funeral Home; Paullina, Iowa

NORMA J. WIESE
Norma June Wiese, the daughter of Edward and Katherine (Jurgensen) Wiese was born on June 30, 1932 at her family farm in rural Larrabee, Iowa. Norma was confirmed in 1945 at Zion United Church of Christ. She attended all twelve grades at the Larrabee School and graduated from the Larrabee High School in May of 1952. After graduation she remained on the family farm where she helped her mother and brother. She moved into Calumet in 1988 and resided there until December of 2009, when she entered Community Memorial Health assisted living in Hartley. She later moved to the nursing home wing where she passed away on Sunday, June 28, 2015 reaching the age of 82 years, 11 months and 28 days.
Norma was a member of Zion United Church of Christ in Calumet. She enjoyed watching her nieces and nephews grow up; she always knew when their birthdays were.
Left to cherish her memory is her brother, Delbert Wiese of Paullina, Iowa; a sister, Arlene and her husband, Don Wittrock of Primghar, Iowa; nieces; nephews and many cousins and friends.
Norma is preceded in death by her parents, Edward and Katherine Wiese; brother, Raymond Wiese; sister and brother-in-law, Geneva and August Gerstandt and sister-in-law, Ida Wiese.
To order memorial trees or send flowers to the family in memory of Norma J. Wiese, please visit our flower store.