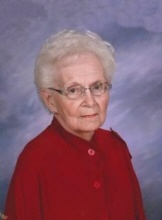 Visitation will be after 3 P.M. Sunday, November 6, 2016
with the family present from 3 to 5 P.M. Sunday
at the Eldridge Family Funeral Home in Paullina, Iowa.

After the graveside service relatives and friends are invited
to join the family at the Germantown Community Building.

ORPHIE M. HATTERMANN
Orphie Minna Anna Hattermann the daughter of Erdman and Mary (Johannsen) Tesch was born July 13, 1922 in Caledonia Township, OBrien County, Iowa. She received her education in country school in OBrien County. On November 11, 1943 she was united in marriage to Clarence Hattermann at St. John Lutheran Church in Germantown. After their marriage the couple farmed south of Germantown for many years until they moved to Paullina in 1983. The couples retirement years were spent in Paullina. Clarence passed away on November 12, 2005 in Sioux City, Iowa. Orphie remained in the family home until moving to the Heartland Care Center in Marcus, Iowa in December of 2015. She passed away on Thursday November 3, 2016 at the Heartland Care Center reaching the age of 94 years three months and 20 days.
She was baptized on September 15, 1922 and later confirmed on March 5, 1939 and was a lifelong member of the St. John Lutheran Church in Germantown where she helped with the Braille work. She enjoyed spending time with her family, traveling, sewing and any kind of hand work, playing cards, gardening and reading.
Orphie leaves to cherish her memory five children; Dorothy Johnson of Sioux City, Iowa; Janette and her husband Charles Mortenson of Kennedy, Minnesota; Patricia and her husband, Fred Dexter of North Venice, Florida; Marlene Thompson of Springfield, Virginia and James and his wife Judy Hattermann of Paullina, Iowa; 13 grandchildren and 15 great grandchildren; also other relatives and many friends.
She was preceded in death by her husband Clarence, a daughter in infancy Mary Jane; two sons John and Donald and daughter-in-law Diana; son-in-law Terry Johnson, parents and one brother Orville Tesch.
To order memorial trees or send flowers to the family in memory of Orphie M. Hattermann, please visit our flower store.