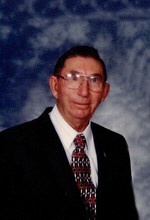 IN MEMORY OF
RALPH R. PUHRMANN

Visitation will be after 3:00pm Wednesday, February 17th with the family present from 5:00 – 6:30pm at the Gaudian-Eldridge Funeral Home in Paullina

Arrangements under the care of the:
Gaudian-Eldridge Funeral Home
RALPH R. PUHRMANN

Ralph R. Puhrmann, the son of George and Emma (Beermann) Puhrmann was born May 24, 1928 in Baker Township of O’Brien County, Iowa. He received his education at Zion Lutheran School and Paullina High School for one year. He was called into the Army serving during the Korean Conflict. On September 12, 1953, he was united in marriage to Neoma Z. Mohni in Hartley, Iowa. After their marriage the couple settled on a farm northwest of Paullina where they farmed for many years, and Ralph enjoyed feeding cattle. The couple retired from farming and remained on the family farm. His wife preceded him in death on January 21, 2008 in Sioux City, Iowa. Ralph remained on the family farm until moving to the Prairie View Assisted Living in Sanborn. He passed away on Monday, February 15, 2010 at the Buena Vista Regional Medical Center, reaching the age of 81 years, 8 months and 21 days.
He was baptized on June 10, 1928 and later confirmed on May 24, 1942 and was a life-long member of the Zion Lutheran Church in Paullina. He was a former member of the Zion-St. John School Board and had served as an Elder of Zion Lutheran Church. He enjoyed bowling, playing cards, fishing and following his grandchildren’s many school activities.
Left to cherish his memory are three children, LaDonna Thooft of Russell, Minnesota; Leon and his wife, Jan Puhrmann of Paullina and Tami and her husband, Wayne Fiddelke of Paullina; seven grandchildren, Nathan, Dustin, Aaron, Megan, Clint, Andy and Bret; one great-grandchild, Paisley Thooft; two sisters, Emily Meyer and June and her husband, Clifford Miller all of Marcus; three sisters-in-law, Alma Puhrmann of Primghar; Teddi Puhrmann and Audrey Puhrmann both of Paullina; also other relatives and many friends.
He was preceded in death by his wife, Neoma; son-in-law, Don Thooft; grandson, Jordan Fiddelke; his parents, brothers, George Jr., Lee, Bently, Ray, Martin; sisters, Gladys, Elsie and Ruth.
To order memorial trees or send flowers to the family in memory of Ralph R. Puhrmann, please visit our flower store.