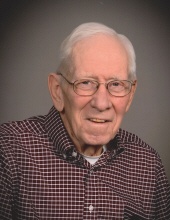 Raymond Brink
Sheldon, Iowa
Raymond H. Brink, age 84, of Sheldon, Iowa who passed away on Monday, June 29, 2020 at Unity Point St. Luke’s in Sioux City, Iowa. His funeral service will be 10:30 A.M. on Friday, July 3, 2020 at the First Reformed Church in Sheldon with Rev. Dave Van Kley ~ officiating.
Burial will be at East Lawn Cemetery in Sheldon.
Visitation with family present will be from 9:30 – 10:30 A.M. at the church on Friday, July 3, 2020.
The family requests that everyone wears a mask during visitation and the service at the church and social distancing guidelines are asked to be followed.
Arrangements are under the care of the Vander Ploeg Funeral Home in Sheldon.
The service will be live-streamed on Sheldon First Reformed at the following link.
https://www.youtube.com/watch?v=54fAochG5IU
Online condolences may be sent to www.vanderploegfunerals.com

Raymond Henry Brink, the son of Clarence and Evadean (Ten Kley) Brink was born on June 12, 1936 in rural Sheldon. He attended school at Sheldon area schools and graduated from Sheldon High School in 1954. He enlisted with the Army National Guard in 1957 and went into active duty in 1958 for six months. He was honorably discharged in 1964.
On June 5, 1958 Ray was united in marriage to Dorothy Sterler at Sheldon United Methodist Church. Ray worked for the Farmers’ Coop Elevators in the towns of Ritter, Matlock and Sheldon, retiring in 2000 after 36 years.
Ray was an active volunteer in the community, serving at Bethel Reformed Church as an elder, deacon, set builder and as a member of the men’s prayer group for many years. In addition, Ray volunteered at Village Northwest, with the Marigold Committee, helping with the Avenue of Flags and at Love, Inc. where he was a financial mentor. In addition, many people counted on Ray to take them to their appointments. He also served on the Board of Directors for the Christian Retirement Home. Although volunteering kept him busy, Ray always made time for his family and time for a game of HuskerDu with the grandkids. Ray thoroughly enjoyed woodworking and helping others with handyman projects.
In 2017, Ray and Dorothy made their home at Fieldcrest in Sheldon, Ray in the Memory Care unit and Dorothy in the Assisted Living area. Despite being in separate rooms, they were blessed to visit with each other daily. The staff in the Memory Care unit enjoyed Ray’s sunny disposition and quick wit; they served him well and became like family.
On Monday, June 29, 2020 Ray passed away at Unity Point St. Luke’s Hospital in Sioux City reaching the age of 84 years and 17 days. Left to cherish his memory are his wife of 62 years, Dorothy; three children, Rick (Robin) Brink of Monument, Colorado; Dr. Shari Brink (Judy Kramer) of New York City, New York and Lisa (Steve) McMullen of Urbandale, Iowa; four grandchildren, Seth (Breanne) McMullen, Alyssa (Christine) Alvarez, Noah (Mallory) McMullen and Micah Brink; three great grandchildren, Harper, Beckett and Reagan McMullen; two siblings, Karen (Derek) Vander Schaaf and Donna Harmison; sisters-in-law, Bonnie Brink, Linda Brink and Donna Sterler; also nieces, nephew, other relatives and friends.
Ray was preceded in death by his parents; brothers, Rodney and Calvin Brink and brother-in-law, Jerry Harmison.
To order memorial trees or send flowers to the family in memory of Raymond H. Brink, please visit our flower store.