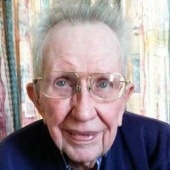 Visitation with the family present will be
from 3 to 5 P.M. Saturday, March 18, 2017
at the Eldridge Family Funeral Home in Primghar, Iowa

CONGREGATIONAL HYMNS
What a Friend We Have in Jesus
O How I Love Jesus
Victory In Jesus
Organist: Alyda Haack

Memorials may be directed to the
American Reformed Church in Primghar

Reverend Gerald G. Dykstra
September 14, 1921 to March 14, 2017
The Reverend Gerald G. Dykstra was born in the small town of Danforth. IL, with his twin brother, George. They were the youngest two siblings of five children born to Jenny Bensama Dykstra, a one-room school teacher, and Syoerd Dijkstra, aka George Dykstra. When Gerald Dykstra was only one month old, his father was killed in a train accident. Gerald Dykstra grew up in poverty, but he was surrounded by love, family, and community. In high school, he set a school record for the 100-yard dash that stood for 20 years. He attended Hope College in Grand Rapids, MI, and graduated from the University of Illinois with a degree in electrical engineering. He worked for General Electric in Erie, PA, where he met his wife, Dorothy. During WWII, he attended Navy officer training school, where the Navy purposively did not graduate him because he was more valuable as a mathematics and navigation instructor than as an officer sent abroad.
After his service in the Navy he became committed to serve the Lord and graduated from Western Theological Seminary. Upon completion of his degree and an internship in rural Alberta Canada, he served as minister at Climber Hill Reformed Church in western New York; Owasco Reformed Church in central New York; Schenectady Reformed Church in the Hudson River Valley; the American Reformed Church in Primghar, Iowa; and the Comanche Reformed Church in Lawton, OK. He retired from the ministry to live with his wife, Dorothy, in Primghar, IA, where they celebrated their 50th wedding anniversary and went on to live many more years together until his wife died last fall in 2016. He is survived by his daughter, Marilyn J. Dykstra and her husband, R. Lewis Van Atta, his daughter, Priscilla Ruth Cole and her husband, Peter Cole, and his grandchildren, Fernanda and Noah Van Atta.
To order memorial trees or send flowers to the family in memory of Rev. Gerald G. Dykstra, please visit our flower store.