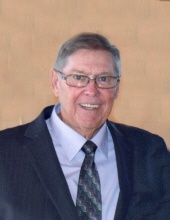 Visitation with the family Present
will be from 3 to 5 P.M. Sunday, March 10, 2019
at the Eldridge Family Funeral Home in Primghar, Iowa.

MUSIC
“In The Garden” sung by: Rodd Holtkamp
“Go Rest High On That Mountain” C.D. Vince Gill
CONGREGATIONAL HYMNS
“What a Friend We Have In Jesus”
“How Great Thou Art”
Organist: LaNan Eldridge

Arrangements under the care of the
Eldridge Family Funeral Home; Primghar, Iowa
RICHARD D. PARTLOW
(August 4, 1946 ~ March 5, 2019)
Richard Duane Partlow, the son of Duane and Marjorie (Carter) Partlow, was born on August 4, 1946, in Dexter, Iowa. He graduated from Menlo High School in 1964, and then attended Northwest Missouri State University in Maryville, Missouri studying education, with and emphasis in social studies and history. He played football for the Bearcats and continued to follow the team proudly for the rest of his life. He met his future wife Judy at NWMSU and the couple married on June 1, 1968, in Kansas City, Missouri. Together, they taught in Oregon, Missouri, Fontanelle, Iowa; Denison, Iowa and Maryville, Missouri. The couple moved to Primghar, Iowa where they settled and raised their family for 40 years. Dick served his community as a principal and superintendent in the Primghar, Sutherland and South O’Brien School Districts for many years, sharing his love of learning with many throughout his career. After leaving South O’Brien, he served as principal for the Farragut School District and then as a drug and alcohol treatment counselor at Compass Pointe. He spent his retirement years with his wife Judy, following the Northwest Bearcats football team, traveling, and enjoying his 9 grandchildren. He passed away on March 5, 2019, reaching the age of 72 years, 7 months and 1 day.
Dick truly loved his grandchildren and took an active interest in their activities. Together with Judy he traveled to as many of their events as possible and followed them online when travel wasn’t possible. He enjoyed gardening, golfing, and following his favorite sports teams, the Iowa Hawkeyes, South O’Brien Wolverines, and most importantly the Northwest Missouri Bearcats.
Dick’s memory will be cherished by his three children, Sarah (Chris) Cline of Smithville, Missouri, Becca (Josh) Moermond of Sutherland, Iowa, and Ben (Kristene) Partlow of Gillette, Wyoming; nine grandchildren, Hannah, Noah, Madelyn, Case, Dain, Gabe, Ella, Karver, and Zane; his brother, Roger (Diana) Partlow of Menlo, Iowa; his brothers-in-law, Steve (Kathy) Clark of Overland Park, Kansas, Paul Clark of Wichita, Kansas; nieces and nephews; and many friends and loved ones.
He was preceded in death by his wife, Judy; his parents, Duane and Marge Partlow and his in-laws, Randolph and Mary Clark, and his grandparents.


The Lord is my Shepherd; I shall
not want. He maketh me to lie
down in green pastures; He leadeth
me beside still waters. He
restoreth my soul; He leadeth me
in the paths of righteousness for
His name’s sake.
Yea, though I walk through the
valley of the shadow of death, I will
fear no evil; for Thou art with me;
Thy rod and Thy staff they comfort
me; Thou preparest a table before
me in the presence of mine enemies;
Thou anointest my head with oil,
my cup runneth over.
Surely goodness and mercy shall
follow me all the days of my life;
and I will dwell in the house of the
Lord forever.
To order memorial trees or send flowers to the family in memory of Richard D Partlow, please visit our flower store.