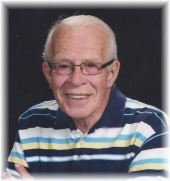 Richard Engelhardt, age 84, of Sheldon, Iowa, passed away on Wednesday, August 15, 2018 at his home in Sheldon. Memorial Services will be at a later date. Richard Amil Engelhardt was born on April 2, 1934 in Grand Island, Nebraska. He was the son of Roland and Iryl (Jackson) Engelhardt. He lived his youth in Sheldon, Iowa and Worthington, Minnesota, graduating from Worthington High School. Richard served in the United States Army during the Korean Conflict. He was united in marriage to Marlys Glessner of Sheldon, Iowa on November 27, 1957 in Spirit Lake, Iowa. Richard worked as a radio announcer in Estherville, Iowa, later moving to Marshall, Minnesota. He worked in other cities in Minnesota as a radio announcer and then moved to Sheldon, Iowa where he worked for KIWA radio and Lewis Drug Store, for many years. He later worked as a salesman for a variety of industries, retiring in 2014. Richard enjoyed gardening. He was an avid fan of the Iowa Hawkeyes and Minnesota Vikings. He passed away on Wednesday, August 15, 2018 at his home in Sheldon. Those left to cherish his memories are his wife of 60 years, Marlys Engelhardt of Sheldon, IA; his children, Vicki Slocum of Harrisburg, SD and her children, Nathan (Dana) Slocum and Nicole Slocum; Sherri (Daryl) Boogerd of Sheldon, IA and their children, Kristin Haakinson and special friend, Jordan Catlett, Alec (Chelsea) Rector, Jordan Rector and special friend Johnnie Puliso; Jeff (Laura) Engelhardt of Indianola, IA and their children, Isabel Engelhardt and Rachel Engelhardt; Scott (Kagendo) Engelhardt of Las Vegas, NV, and their child, Mwenda Randall; eight great-grandchildren, Jayden McCraken, Merrick Slocum, Olivia Slocum, Kia Preston, Beckett Preston, Peyton Haakinson, Kinsley Rector, Kolson Rector; two sisters, Jean (John) Mulder and Joan Cattett. He was preceded in death by his parents, grandparents, three brothers-in-law and one sister-in-law.

To order memorial trees or send flowers to the family in memory of Richard Engelhardt, please visit our flower store.