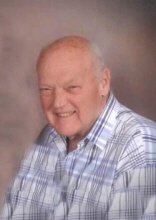 Visitation will be after 4 P.M. on
Friday, March 3, 2017
with family present from 5 7 P.M.
at the Eldridge Family Funeral Home in Paullina

Final Toast: After the fellowship time at the
Hawkeye Bar in Paullina

RICHARD M. VAN BEEK SR.
Richard Mark Van Beek Sr., the son of Chris A. and Verna (Teeselink) Van Beek was born March 20, 1952 in Sheldon, Iowa. He attended schools in Archer and later graduated from Paullina High School in 1970 where he excelled in football. He went on to attend Iowa State University and Westmar College. He worked for a short time for the Iowa D.O.T. in Britt, Iowa before helping start Triple R in Primghar. He started trucking and owned his own truck beginning in 1974 and trucked for over 40 years before his retirement. He purchased the Hawkeye Bar in Paullina in September of 2016. On June 9, 1973, he was united in marriage to Terri Morrison and to this union four sons were born, Richard Jr., Matthew, Ryan and Chris. The couple later divorced in 1986. On August 26, 2000, he married Angie Boyd and Jeremy and Aiden were added to the family. Rich passed away at his home in rural Paullina on Thursday, March 2, 2017 reaching the age of 64 years, 11 months and 12 days.
He was a member of the Zion Lutheran Church in Paullina. He enjoyed the outdoors, fishing, hunting, camping, golfing, riding his motorcycle and tending to his livestock.
Rich is survived by his wife, Angie of Paullina, IA; four sons, Richard Jr. (Lindsay) Van Beek of Sheldon, IA and Richs six grandchildren and 4 great grandchildren; Matthew (Nicole) Van Beek of Sheldon, IA and Richs four grandchildren; Ryan (Angela) Van Beek of Sanborn, IA and Richs eight grandchildren; Chris (Nikki) Van Beek of Sanborn, IA and Richs two grandchildren; and Jeremy Bush and Aiden of Paullina, IA; five brothers and one sister; David (Carol) Van Beek of Sheldon, IA; James (Lynn) Van Beek of Ashland, MA., Robert (Janet) Van Beek of Primghar, IA; Jon (Sharon) Van Beek of Primghar, IA; Jane (Shawn) Zupp of Washta, IA and Daniel (Janice) Van Beek of Paullina, IA also other relatives and many friends.
He was preceded in death by his parents and one nephew, Mike Van Beek.

Rich was a loving husband, father, grandfather and great grandfather
and a friend to many; he will be greatly missed.
To order memorial trees or send flowers to the family in memory of Richard M. Van Beek, please visit our flower store.