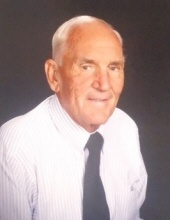 MUSIC
“It Is Well With My Soul”
Sung by: Laura Bonestroo
Special Music Sung by Grandchildren and Great Grandchildren
CONGREGATIONAL HYMNS
Processional: “On The Good and Faithful” PH #7
Recessional: “Jehovah Is My Light” PH #48
Pianist: Lora Petitt

In lieu of flowers, memorials may be directed to:
Sheldon Christian School

Robert (Bob) Poppema, age 80, was born on a farm near Sheldon, Iowa on April 17, 1940. He was the son of Fred and Winnie (Smit) Poppema. Robert attended Sheldon Christian grade school and graduated from Western Christian High School in Hull in 1957. After high school, he worked for Mouw and Den Hartog Construction for 7 years. He was united in marriage to Mavis Uittenbogaard on October 10, 1961 and they resided in Sheldon. In 1962, Bob served in the Iowa Army National Guard. In 1964, Bob established his own construction company. Later, Harold Sikma joined Bob as a partner, so the company name was changed to Poppema-Sikma Construction. The first several years, they built new homes and farm buildings. In the mid 70’s, they began building commercial buildings, schools, churches, hospitals and factories.
Bob was very dedicated, and Poppema-Sikma Construction is well-known for their quality work. Bob was very committed to his church, First Christian Reformed Church in Sheldon and strived to follow the Lord’s will. He served as an Elder and Deacon for many years. He also served on the Sheldon Christian School and Western Christian High School boards.
Bob was very involved in numerous city projects, giving back to and promoting his community. Bob loved his family and strived to set a fine example for his family and friends to follow.
Those left to cherish his memory are his children, Natalie (Joel) Van Ginkel of Hull, Iowa, Leah (Dan) Heiliger of Archer, Iowa, Dan (Kathy) Poppema of Sheldon, Iowa, Mike (Katy) Poppema of Remsen, Iowa, numerous grandchildren, and great grandchildren. Bob is also survived by his sisters, Carol Smidt of Sibley, Iowa, Jane (Arlan) Lode of Sheldon, Iowa; brother, Larry (Linda) Poppema of Lincoln, Nebraska.
Bob was preceded in death by his wife, Mavis; parents; son, Kenny Poppema; brother, Harlan Poppema; brother-in-law, Roger Smidt.
To order memorial trees or send flowers to the family in memory of Robert "Bob" L. Poppema, please visit our flower store.