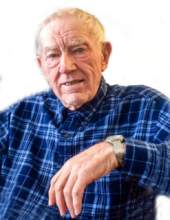 Rodney Courtland Anderson, age 95, of Hawarden and formerly of Paullina who passed away on Tuesday, April 5, 2022, at Hillcrest Care Center in Hawarden. His funeral service will be 10:30 A.M. on Wednesday, April 20, 2022, at Faith Lutheran Church in Marcus with Rev. Alan Cummins and Rev. Wallace Anderson ~ officiating.

Burial will follow the fellowship time at the church with his favorite food, ice cream. Burial with military honors by Russell West Post of the American Legion will be held at Prairie View Cemetery in Paullina.

MUSIC
“Untitled Hymn (Come To Jesus)”
sung by Anna Thvedt Malcolm
CONGREGATION HYMNS
“What a Friend We Have in Jesus”
“Rock of Ages”
“Nearer My God To Thee”
Organist: Steve Berntson

After today’s service relatives and friends are invited to join the family in the
fellowship hall of the church.

Arrangements under the care of the
Eldridge Family Funeral Home Paullina, Iowa.

Hawarden, Iowa – Rodney Courtland Anderson, 95, from Paullina, IA, entered into eternal rest on April 5, 2022. Born in Liberty Township on July 13, 1926, the third child of Lillie (Tollefson) & Adam William Anderson. His early childhood was spent on the family farm where he began his education at Union #1 country school before graduating from Paullina High School in 1945. Shortly after graduating he was drafted and entered the U.S. Navy at the Training Center in San Diego, CA. He left service in 1946 as a US Navy, Seaman Second Class, USN-1 and received the WWII Victory medal. Coming back to the area, he continued farming with his dad and later purchased and farmed a piece of property in Larrabee, IA. Later he spent some time transforming a small convenience/grocery store into Piccadilly Pizza. He continued farming many years and he would later inherit the family farm with his older brother. They worked in partnership until Rodney retired in October of 2015. He was a faithful and loyal church member of Siloam Lutheran Church in Paullina supporting his congregation until it closed. He then became a member of Faith Lutheran Church in Marcus.
He is preceded in death by his parents, two siblings, Helen Knievel, Arnold Windsor Anderson, brothers-in-law Lowell Gillespie, Bill Knievel, and a nephew, Jace Knievel.
Those to mourn his passing include surviving sister Barbara Gillespie, sister-in-law Kay Anderson, two step-children Jeffrey (Conni) Quinn-Anderson and Barbara Anderson (Steve) Smith, five grandchildren, nine great-grandchildren, fourteen nieces and nephews, numerous cousins, the angel caregivers at Hillcrest Health Care Services and St. Croix Hospice and his many, many friends.

A celebration of his life will begin with visitation from 9:00 am to 10:15 am on Wednesday, April 20, 2022, at Faith Lutheran Church, Marcus, IA. This will be followed by a prayer service for the family. Memorial services will be at 10:30 am with Rev. Alan Cummins and Rev. Wallace Anderson officiating. Lunch will follow the service that will include his favorite food, ice cream. Burial will follow with military honors at Prairie View Cemetery in Paullina.

In lieu of flowers donations can be made as family requests.

To order memorial trees or send flowers to the family in memory of Rodney Courtland Anderson, please visit our flower store.