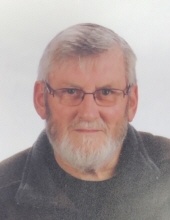 IN LOVING MEMORY OF
ROGER A. POPPEMA

Military rights presented by:
McGothlen-Cowie Post #145 of the American Legion


Roger Allen Poppema, the son of Steve and Jeanette (Peters) Poppema was born on May 8, 1943. He attended Hospers Christian and Western Christian Schools. Roger enlisted in the United states Army in 1962. He was united in marriage to Donna Uittenbogaard on March 18, 1966 at Sheldon First Christian Reformed Church to this union two children were born, Greg and Amy Jo. After their marriage the couple resided in Sheldon and in 1977, they moved to the family farm. Roger spent many years farming and never technically retired as he enjoyed working. A normal day was work, play, or service to others. No chore was left undone and tasks were always executed well before required. He moved into Sanford Senior Care in Sheldon in April 2020 and passed away on Sunday, May 24, 2020 reaching the age of 77 years and 16 days.
Roger was a member of Immanuel Christian Reformed Church. A toothpick was part of his common attire. He loved spending time with his grandchildren who he referred to them as “little shits”. Roger and Donna enjoyed going to many sporting events, including their yearly trip to the state basketball tournament. They always were up to going to watch a good matchup, they especially enjoyed watching Western Christian, and Dordt basketball games. He never missed a grandchild’s basketball game. Roger had a gift of being able to talk and listen to anyone, at any time, in any situation
Left to cherish Roger’s memory is his wife of 54 years, Donna of Sheldon; two children and their spouses, Greg and Krystal Poppema of Sheldon and Amy and Steve Rozeboom of Rock Valley, Iowa; four grandchildren, Brooke and Dan Faber, Taylor Poppema, Morgan and Chad Hoekstra, Dalton and Kenli Poppema and Beau Kapperman; three great grandchildren, Drake, Tate and Hayes Faber; siblings, Junior and Jan Poppema of Hospers, Iowa, Carol and Jerry DeVriess of Colorado and Howard and Joyce Poppema of Hospers, Iowa. He was also survived by nieces, nephews, other relatives, and many friends.
Roger was preceded in death by his parents.
To order memorial trees or send flowers to the family in memory of Roger A. Poppema, please visit our flower store.